As threatened, I went up to Baltimore on Saturday for the 2006 edition of the Baltimore Kinetic Sculpture Race at the American Visionary Art Museum.

I think this is my third year going (I missed last year due to a conflict). Here are my 2006 photos (also, you can find my photos from the 2004 race that I posted just last week). 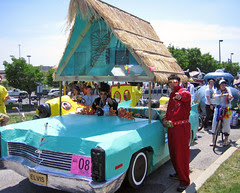 I left a little later than I hoped, and it definitely didn't help that I-95 was closed down to two lanes just in front of Baltimore, so I got to the museum at around 11:30. Instead of hunting for parking, I just ate what would later be a fifteen dollar fee, strapped on my skates and headed for the Canton Waterfront for the Water Loop.

There was only going to be one water entry this year (as opposed to two in previous years), so I wanted to make sure to see at least part of it.

It was a great day, 70ish and sunny; oddly enough, I did put sunscreen on the appropriate bits, so didn't get fried. I wasn't really wearing a costume, just a TurboFlare 360 (a spinny LED thing) zip-tied to my backpack.

Anyway, there was frothy churning on the water: 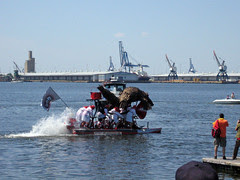 As well as a lot of towing (due to high winds): 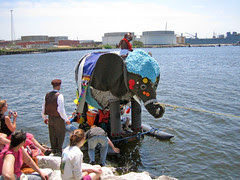 I also took video of some of the road sections, which I will put online somewhere after I stitch it together: 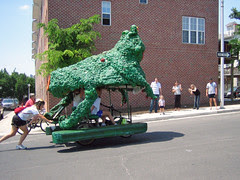 Anyway, the water loop was fun, as was the run up to Patterson Park; I skipped most of the sand course, and the mud pit seemed to not be as hard this year (which is easy for me to say, as a spectator), but it was fun to hang out.

The run down back to the Museum is my favorite part, since it runs down the streets through Fells Point and the Inner Harbor (it retraces the morning route, which I'm never there early enough to see).

This year's version was a little crazy, since the police showed up at 2:50pm and started sending people off early -- not everyone was ready, and I think the field was a little bit more spread out because of it, but everyone managed.

There was also some sort of fire, too, since I saw a bunch of fire trucks speeding by -- I was afraid some sculpture was going to get pasted by a fire truck.

Going through the Inner Harbor also had the amusement of a SparkleMotion-type dance team among the spectators, as well as some potato chip people handing out free salty snacks to passersby, including the racers: 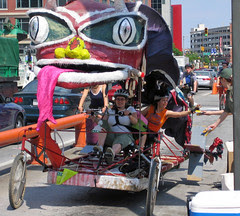 Anyway, that's about it. It was fun as usual and a great day to be out. You can see the Baltimore Sun article. and the Kinetic Baltimore writeup.