Here are a few photos from Galaxy Hut last week. It was kind of a doubleheader, as I'd just come from a kickball game and Carpool. 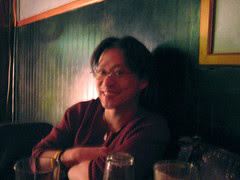 I did not take that picture, obviously, though I kind of like it.

It was curiously uncrowded, though as I recall, it was pretty darn chilly that night.