So the Washington Blogger Meetup Group had its monthly meeting last Wednesday.

I went to last month's edition at McFadden's, but this was my first time at the regular location of Pharoah's on Columbia off 18th St.

I crossed over into the city without incident, though I then went through about 20 minutes of fruitless searching down tiny little side streets looking for a parking spot. Finally, it occured to me that the usual Adams-Morgan parking strategies would work, so I moved down the hill and found a spot off 18th and Florida.

The meetup itself was good -- Pharaoh's is a small place, and we sixteen or so had the run of the place. I wasn't very prolific with the photos, which are here: 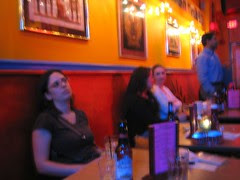 I re-met a few people from last time, including Amber of The Latest Obsession, Martin of Total Information Awareness, Jamy of Grateful Dating, and of course organizer Rob of The Goodspeed Update; I also met Leon of Yeah... I Said It and a few other folks, although I was a little slack and not as social as I should have been.

I'd also talked to Adriana beforehand; she was planning on going, but sick kid issues prevent her from attending this time.

Anyway, after the meeting broke up, I went with Amber and Michael (of Articulatory Loop) down the street to get falafel at the Amsterdam Falafelshop. It's small, a little tucked away even though it's right on 18th Street (probably overshadowed by the nearby big slice pizza shops), and has a very well-appointed condiment bar: 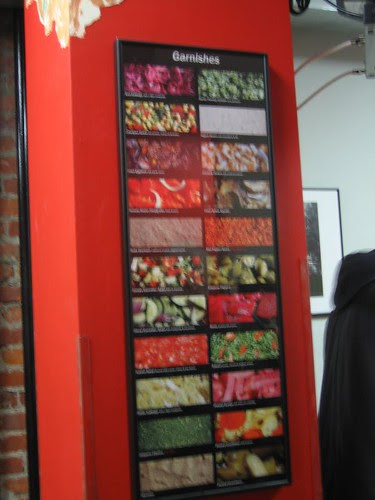 So, we ate and talked. The falafel was very good, though I probably went a little heavy on the garlic. Amber & Michael both work in science and research, so I was mostly listening, until somehow the topic of drunkenness, alcohol and the Asian flush came up.

Naturally, I was able to weigh in with anecdotal evidence about how taking Pepcid AC antacid counteracts the effects of the Asian flush; I let the scientists speculate as to why.

Afterwards, I headed back down the hill and towards suburbia. I met up with Conor and Scott at Clyde's and gave them a ride back after we closed it down.

Oh, I almost forgot -- the line of the night for me happened when I was talking to Amber (I think) -- I forget if it was at Pharaoh's or the falafelshop, but I was describing my blog, and I said:

I will need to work that into my description.

Sorry we didn't get to talk again at this meet up. I love that falafel place! I hope you had the fries too.