Bough Down Before Me (or Snow Day)

So it snowed. Started late Saturday, which is why I stayed in instead of going to a birthday party last night, which I would have much rather done. However, given the way people drive in snow around here, I am pretty sure I made the right decision.

For example, I heard on the radio last night that one brain donor on the Beltway managed to knock one of the salt/plow trucks off the road.

Anyway, all told, we got around eight to ten inches.

It was pretty, white and pretty white when I looked out the window this morning.

I got up to shovel the sidewalk, when I noticed that the branches of the tree by my parking space were hanging pretty low, due to the weight of the snow and ice.

(I added "and ice" specifically so that last paragraph wouldn't rhyme.) 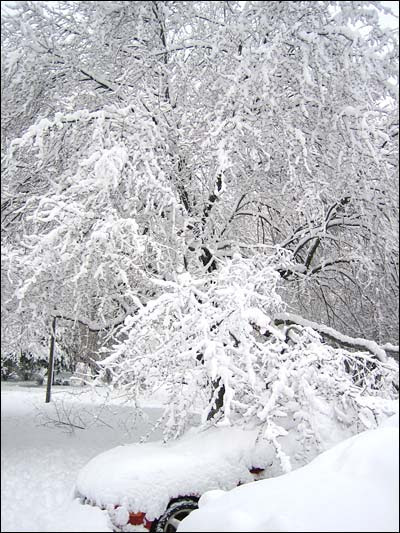 In fact, the branches were touching my car.

I got a little closer and saw that the tree limb was more than bent -- it was cracked, and the branches were actually blocking my car in. 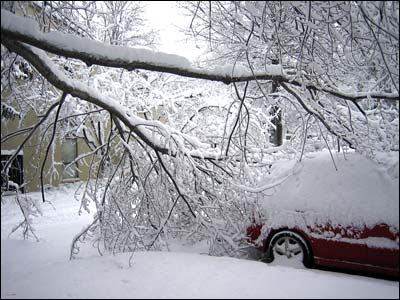 Anyway, it wasn't too bad -- I took my saw and started cutting away branches. I was joined by some neighbors whom I hadn't met before -- Bob, Steve and Luis -- who gave me a hand clearing away the branches. So, I was able to hack off the offending limbs and clear off my car.

Since that bough has to come down anyway, I went back later in the afternoon and trimmed it down so I could resume parking in my space.

I will have to call the homeowner's association, since it's their tree, and that cracked bough and a few others will need to be pruned.

After shoveling the sidewalk, I went on a walk around the neighborhood, taking pictures.

Flickr has been flaky tonight, though, and besides, the laptop screen is a little too bright, causing me to make my photos too dark, so I will upload the rest of my snow cliche pics tomorrow.

Good story. Tis nice to hear of instances of when neighbors are neighbors and not just people who live around you.