Beach Shack Saturday, Plus a Moratorium on Fun?

It's kind of perverse, but I kind of feel like I have to stop doing fun things like go out to bars or museums, because that will ultimately result in more pictures that I will need to treat, upload and blog.

I realize that not everything needs to be documented. Like I said, it's perverse.

Anyway, I put up my Flickr set from Clare and Don's Beach Shack last Saturday. I actually uploaded it last night, but I fell asleep before I could blog about it. 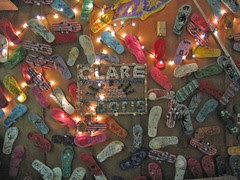 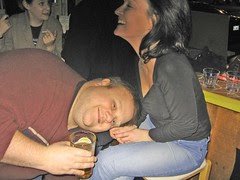 Anyway, check out the entire set.

Apparently, Saturday night is Karaoke Night at the Beach Shack. The song list was fairly robust; unbeknownst to the people I was with (i.e. the usual gang of idiots), I put my name on the list, and when I was called, I got up and sang Dean Martin's "You're Nobody 'Til Somebody Loves You."

I was pretty confident it was in my range (according to Adam, I'm a baritone), based on my December in-car recording sessions; plus, as the DJ remarked after I was done, it's only a two-minute song (and 40 seconds of that is a musical break), so I didn't have to be on stage very long.

I turned in a fairly credible and non-humiliating performance, so I got that going for me. Also, my camera was in my jacket pocket while I was on stage, so there's no evidence.

Other than that, there was lurid talk (that I apparently missed); shots were consumed, and we closed the place down. I ended up dropping neuroscientist Rosalind off at her place in Georgetown, then Scott and I went to get some breakfast at Bob & Edith's Diner. (Actually, we tried IHOP first, but there was a line. It was also very, very cold that night.)

Scott texted Lon at 3AM -- oddly enough, he was still up, heading in from Baltimore via Georgetown, so he met up with us, so he too was able to see the Al Gore photo: 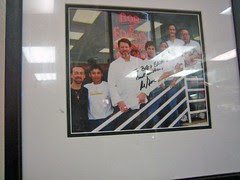 So basically, it was a late night.