I Am Glad the Weekend Is Over So I Can Rest

This weekend was fairly busy. Not a lot of couch-sitting occurred. However, I did not take a single picture, even though I had a camera on my person much of the time, so I cannot prove any of the following happened (save for one instance).

Started off on Friday night at a Mardis Gras party in historic Leesburg. I was working security: 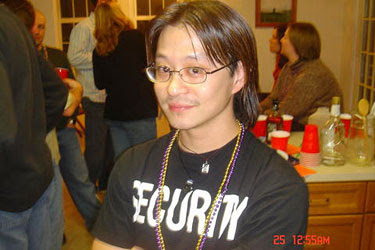 Saturday night, went over to Summers in Arlington to watch the 6 Nations Rugby Tournament rerun with the Irish, Adam, Jenny and Brian.

The guys in green won.

Afterwards, we went to the Four Courts, since, it is, after all, on the way home. We ran into, like, a thousand people from work in the back room -- they were gathered for a birthday party. It would have been rude to not hang out.

Of course, this put me in great shape for more rugby-watching the next morning. Live, Ireland vs. Wales, at Fado in D.C. Fortunately, the All-Day Irish Breakfast is fairly substantial.

That's four different types of meat product. A wag in the group (who shall remain nameless, since he kicks up a fuss whenever he gets mentioned here), talked of ordering the vegetarian Irish Breakfast, which would be beans, tomato and bread.

I also ordered a Harp and Cider; as has happened before, I got two separate pints, as was not my intent, but fortunately, I was able to combine the two manually.

Now, the rugby was fairly interesting. I'd never watched a match (well, not since the night before). More fluid than football, less boring than soccer. On throw-ins from the sidelines, teams are allowed to hoist a guy into the air, causing me to speculate that American males with collegiate cheerleading experience might be useful in such a match.

One other thing I noticed was that the RBS sponsor logos painted on the field use a kind of forced perspective that's optimized for the TV audience -- they're square up on the TV, and it's kind of disorienting when someone runs across them.

Anyway, the Irish won -- I guess there's a kind of make-it, take-it when it comes to scoring, so once one team gets rolling, it's hard to comeback. We eventually headed back to Arlington and wound up back at Four Courts, since, it is, after all, on the way home. There was also some sort of St. Paddy's Day Parade fundraiser, so there was music, and kids doing traditional Irish dance. Also, the chair I was sitting on came apart under me, though I think Tom is somehow at fault.