Okay, so I still need to do my writeups from BarCamp NYC, and I have a million other things to do that are actually work-related (though, I guess, when you do blog stuff, everything blogging is "work-related"), but I wanted to do a quick entry from the Washington Blogger Meetup last night at Mackey's in DC.

I got there a little after 8pm, and made my way to the back. I figured I would look for anyone who wasn't wearing a tie. Fortunately, I spotted nametags and dove in.

Right off the bat, I met Kathryn of Kathryn on... and Rob of The Goodspeed Update, two of the primary instigators of the event -- they were strategically positioned at the bar.

After that, things devolved into the usual haze of bar conversations, business cards and beer. (Yes, alliteration, the calling card of any good hack writer.) It was an interesting mix of people -- and by interesting, I mean both "attractive" and "incredibly (even painfully) young."

There were other folks, but these are from the business cards and napkin notes I collected.

I brought my camera, of course, but I only took a few pics and they're pretty bad, since most of the time I was forgetting whatever it is I was trying to do with the flash -- here's my Flickr set: 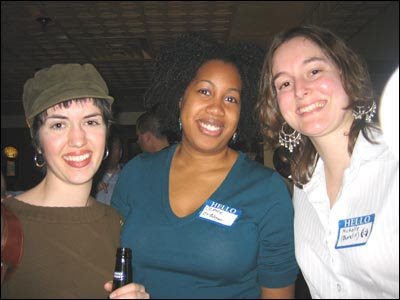 Some highlights of conversation included:

* Discussing professional writing and the difference between online Journals and blogs with Jadxia of The Jade Pages.

* Learning that the National Zoo's panda, Tai Shan has a blogging alter ego named Bandit, who does not like the nickname "Butterstick", from Michelle of Inner Monologue of Bandit the Panda.

* Talked shop (of sorts) and PostSecret with Larissa of The Countdown of V.

* In a very 'High Fidelity' moment, swapping Top 5 albums with Brian of I-495 Blues and Amber of Latest Obsession -- addled by drink, I think I panicked and threw together a half-assed list that included Cocteau Twins, Beethoven's 9th, Soul Coughing and a few filler albums, though I did come up with a new theory linking Heisenberg's Uncertainty Principle with Top 5 album lists (namely, that the act of observation influences the composition of the lists, so we can never truly have an accurate Top 5 album list) -- However, I think Amber topped me with a reference to Schrodinger's Cat.

* Spoke briefly to Nicole of Stuck in a... -- she's a Terp and Junkies fan, so it's probably a good thing we didn't talk longer, or she might have caught me trying to sneak glances at the score of the Duke game.

* Dove to the limit of my hacker knowledge to talk Black Hats, White Hats, Shmoo and Defcon with Alex of Al3x.net

* I seem to recall making fun of Nicholas Negroponte (as I tend to do after a few drinks), and internet utopianism, as well as throwing around a lot of quasi- and meta- words with Total Information Awareness.

* And, I'm pretty sure I ended the evening ducking the guy from NBC4.com and talking kickball (which I do) and salsa (not so much) with Jamy of Grateful Dating.

So it was fun -- I will try to catch the next one, even if I do have to come in from West Virginia or wherever the hell out in the boonies that I live.

Whereabouts in the boonies do you live? If front royal, maybe we'll see each other in the sticks sometime! Nice meeting you, of course.

Kathryn Is So Over said...

Great meeting you, Joe. Thanks so much for coming.

I'll have to come seek you out next time. I think I might have gotten there too late...