Talking About My Comfortably Numb Generation in Aja

This morning, I had a very confusing dream involving much of the pantheon of classic rock.

I was hanging out with Pink Floyd after a meeting. It may have been after writing some songs with them, or it could have been some sort of tutoring session.

A diabolical conspiracy of some sort is also not out of the question.

In any case, one of them (I am not sure which member it was, other than the fact that it was not Syd Barrett) gave me a ride home.

At one point, the driver ran a stop sign over by Reston Hospital and very nearly got clipped by a car going the other way. He got very angry, because he'd thought the other car had run the stop sign.

After I pointed out that it was he, in fact, who'd erred, we had a good laugh.

We then went to someone else's concert. I'm pretty sure it was The Who.

Pink Floyd-guy was able to get us good seats, because rock stars can get tickets to other rock stars' concerts on short notice, you know.

It was not your typical Who show. There were dogs on stage.

At one point, I was petting a very compact Doberman (I had an aisle seat). However, I am not sure if the Doberman was part of the show.

In a shocking twist ending, just as I was waking up, I realized that the main character I'd been talking to in the dream was not from Pink Floyd, and in fact was Walter Becker, from Steely Dan.

Incidentally, Walter Becker now looks disconcertingly like Mr. Kidd, one half of the very lame gay assassin duo (yes, Gel-Man, they are LAME) in the Bond movie Diamonds Are Forever.

Don't believe me? You are a fool: 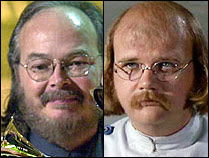 FYI, Walter Becker is on the left. Mr. Kidd is on the right.

Lastly, Diamonds Are Forever is a pretty weak movie, but I will watch it when it's on TBS just for Jill St. John. Rowr.

Did you ever think you'd use the phrase "lame gay assassin duo"? I haven't watched this one in quite a while, but at least they're more "believable" than Denise Richards as a nuclear scientist.