The Marine Corps' MV-22 Osprey tilt-rotor aircraft had a pretty high-profile role in Tuesday's rescue of one of  two F-15E crewmembers who went down in Libya late Monday night. 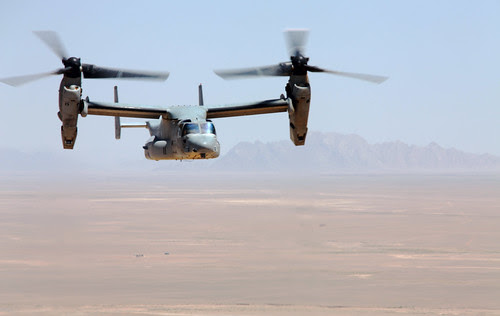 US Marine Corps Flickr image, used under Creative Commons license.
In fairly predictable fashion, on Wednesday, over at the Lexington Institute's Early Warning blog, Loren Thompson, Ph.D. (who seems to have a reputation for having never met a big-ticket weapons system he hasn't liked -- save for ones built by companies that don't underwrite the Institute), capitalized on the rescue as an opportunity to bang the drum for the Osprey, and for big-ticket, high-capability weapons systems in general: "Marine Rescue Mission In Libya Shows Value Of V-22, And Raises A Question For Policymakers."


This week, two Ospreys from the amphibious assault ship USS Kearsarge provided a real-world demonstration of why the Marines were so eager to acquire the aircraft. With close air support from Harrier jumpjets, the Ospreys rescued the stranded pilot of an Air Force F-15E fighter-bomber that had crashed in Libya. Because they are tilt-rotors rather than conventional helicopters, the Ospreys got to the downed pilot faster than any conventional helicopter could have. In fact, it isn't so clear regular helicopters could have rescued the pilot at all, given the distances involved. [Emphasis added.]

I'd say it's pretty darned clear that regular helicopters could have rescued the pilot, given that details of the rescue operation had been published the day before in the Navy Times ("Details of Marines' pilot rescue released") and outlined the aircraft package involved: two MV-22B Ospreys, two AV-8B Harrier jets; a KC-130J tanker, and two CH-53E helicopters carrying the Marine Quick Reaction Force (which didn't actually land, as it wasn't required).

Selling Past the Close
Now, if you compare the specs for the V-22 Osprey vs. the CH-53E Super Stallion, you can see that the Osprey clearly has advantages in speed (over 100 mph faster at sea level) and range (879 to 540 nautical miles) over the Super Stallion. And the piece would have been a perfectly good shill job without completely omitting the role of regular helicopters and then creating fear, uncertainty and doubt about their ability to do the job at all.

I guess it isn't so clear that the last sentence is necessary at all. Then again, I'm not a Ph.D.