Dumb Things I Have Worn Around My Neck

I don't wear jewelry (visibly, at least), with the lone exception being a necklace. A few things I have worn: 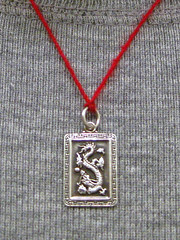 Silver dragon pendant on red string. Loong means "dragon" in Chinese -- the character is on the reverse side. I rarely take it off except to change the string, which is why it's tarnished) -- it's kind of my thing now.

Hardware is just a brass eyelet and clasp from a craft store. FYI - craft stores are good for little fasteners and other items for keychains and such, sometimes better than hardware stores.

A gift from Mom. 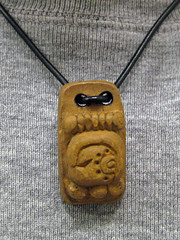 Stone carving of a Mayan symbol (I believe) that's basically the equivalent of my birth sign. It also reminds people of the tiki doll necklace from the Brady Bunch. It's kind of heavy and I don't wear it much any more, especially after I got bonked with my surfboard and nearly drowned. No, wait, that was Greg Brady.

Worn on a leather cord, with more cheap craft store hardware. If I ever want to wear it again, I'll probably need to get a longer cord -- my neck's gotten wider.

A gift from my sister, who brought it back from Mexico. 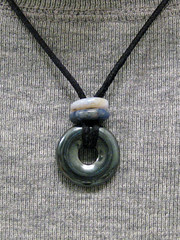 Simple polished hematite donut, topped by two other flat beads. I made it myself from bead store materials back in college, I think. Took me a while to find the right kind of cord.

It looks a little bit like the wireless necklace mics you see people wear on reality TV shows when they are naked. 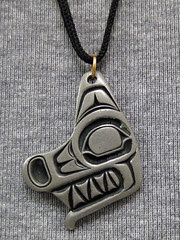 A pewter pendant depicting a Pacific Northwest Native design of some sort of animal. The cord is gutted paracord, tied with a fisherman's knot, which you can use to adjust the length. The original chain gave me contact dermatitis, which is a fancy way of saying "rash."

A gift from a former girlfriend who brought it back from Seattle, a long time ago. I wasn't very good to her. I still feel a little bad about that. 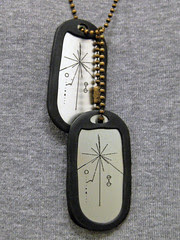 My Galactitags -- apparently, the Web site is back, and still with the original proprietors (or at least, with someone else with a P.O. box in Sea Girt, NJ). I wrote about them before. 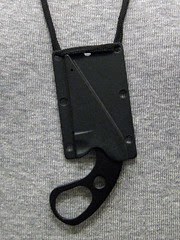 Kabar TDI LDK (Last Ditch Knife.) One of my modest collection of neck knives (knives designed to be worn around the neck, not for neck-stabbing) that I never carry. (I just don't have a need for fixed blades.) The blade is only 1-5/8" long. 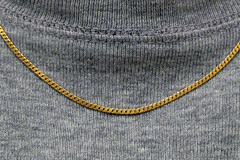 Gold chain. Yes, I grew up in New Jersey. No, I never wear it these days. 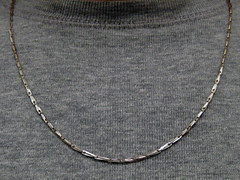 White gold (I think) chain. I, too, never wear it.

Tip: If you're idly swinging the chain around and you accidentally hit yourself in the glasses, it will leave a line of small scratches in them. Ask me how I know this. 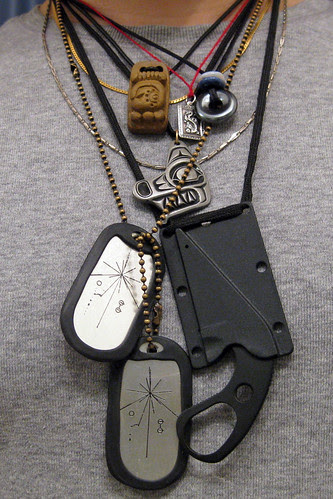