Dumb Sandwiches I Have Made Lately

* There is nothing quite like the stupid you feel when you go to make toast and find the toast you left in the toaster and forgot about the last time you made toast.

* If you leave American cheese in the fridge long enough, it will petrify into something resembling peanut brittle, only made entirely out of cheese: 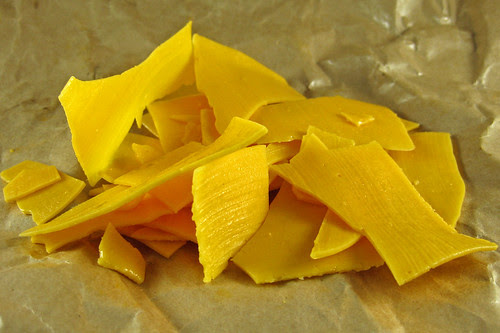 American Cheese chips.
I will say this again: it's a chip made entirely out of cheese.

I'm surprised that someone hasn't tried selling this as a snack product yet.

* "Carolina deli turkey" is very moist, probably because it's been soaked in chicken broth or some such. It's still tasty, though.

* Turkey pastrami is neither turkey, nor pastrami. Discuss.

Joe, that is kind of gross. Do we need to get you a girl who can cook?

I'm a quite competent (albeit lazy and straight-ahead) cook, thankyouverymuch... this is more about pantry management and fridge science experiments than anything else.