A Problem With Commitment: Indeed

I say "indeed" a lot. Depending on context and inflection, it can have a variety of meanings, but I find it most useful when I have to acknowledge a statement without casting judgment on it.

For example, say you're in a social situation where custom frowns on calling someone a complete idiot, and you're faced with a statement like, "We should amend the Constitution so that cats have the right to vote." 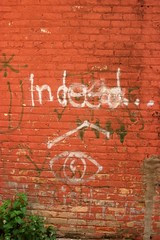 Photo by Flickr user dbjorn, licensed under Creative Commons
A suitable response is "Indeed," followed by a polite excuse and hasty relocation.

("Quite" is a similar word, although you really have to have a clipped British accent in order to pull it off, and even then it sounds judgmental.) Photo by Flickr user istolethetv, licensed under Creative Commons
The value of "indeed" is that it it acknowledges the statement, but doesn't commit to a decision, opinion or judgment in response.*

The Dark Side of Indeed

This is all well and good, but problems arise when you (okay, I) start overusing the word, using it in situations to create space around decisions that you're trying to defer, but where other people are expecting an answer.

An example happens around social gatherings and RSVPs: If the statement is "We're going to meet at the restaurant at 8pm," responding "Indeed" at that point really tends to annoy the other person.

This is because by giving a non-response, you're being noncommittal, and sending any number of messages (including "I can't be bothered" or "I'm waiting for something better to come up."). A response of "I'll have to get back to you" is better than the black hole of "indeed," which withholds even the promise of a response.

Looked at another way, it's infuriating in the same way as when you're trying to have an argument with someone who isn't arguing back.

It's almost ironic how an answer designed to be as inoffensive as possible can end up eliciting a strong response. 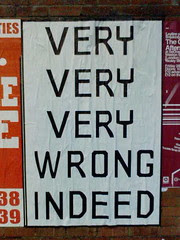 Photo by Flickr user emsef, licensed under Creative Commons
Now, for the record, my own usage of "indeed" in this manner predates its popping up as a catchphrase in pop culture (such as used by Teal'c from Stargate: SG-1 or Omar from The Wire.) Photo by Flickr user designwallah, licensed under Creative Commons
In fact, it goes all the way to high school, where Mr. Aragona, our G&T class teacher used it in just this very fashion.


*To my understanding, it's similar to some contexts of the Japanese "hai," where it can mean "yes, I understand" as opposed to "yes, I agree," which can make a difference when you're reading Miranda rights to Japanese nationals (according to a half-remembered memory of an article from the acclaimed legal journal, Readers Digest.)

Hi Joe....wondered where you went after AOL Jland folded. Come visit on Facebook, Guido (from England) has set up a page for ex Jlanders and there are over 200 people already and some are interacting again. You were such integral part of our experience there I know quite a few would enjoy reading your stuff again....Sandi (used to be sdoscher458)

Hi Sandi -- thanks for the heads-up. Hope all is well.