Please Help My Sister Kickstart a Documentary About the Most Interesting Dad in the World (by Feb. 28) 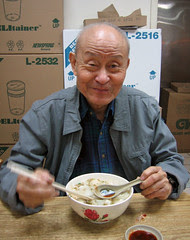 This is my Dad. He was born in Malaysia. You can't tell from the noodles, but he was held by the Japanese as a prisoner of war during World War II. (That's the war you used to see on the History Channel before they started doing reality shows about pawn shops.)

He'd been, briefly, a mechanic in the Royal Air Force, before the Japanese Imperial Army made him become a copper miner for a few years.

After that, he served in the Merchant Marine, mostly on oil tankers. He was kicked out of the country for being an illegal alien. (Technically.) He was a U.S. Army tank driver during the Korean War. In New York, he worked with kids, as a waiter, and as a doctor. (Not at the same time.)

He went to medical school in Italy, and still speaks fluent Italian.

He has a lamp made out of an artificial leg.

He's owned both a VW Beetle and a Mustang. (Not at the same time.)

He's never been in an beer commercial, and I am admittedly biased, but I think he's the most interesting man in the world. 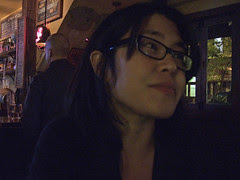 This is my sister. You may remember her from such films as Chicken Fat Music Video and Grandpa, the allegedly psychic spider monkey.

My sister is doing a documentary about my dad. She's raising funds through Kickstarter, and while she's hit her first goal for postproduction funds, if she raises a bunch more, she'll be eligible for matching grant funds.

Here's the trailer for the film, Every Day Is a Holiday:


My Take on the Title

When I was growing up, I used to forget my dad's birthday. He never made a big deal about his birthday, because after his POW experience, every day was a holiday. (Anyway, that was my excuse for forgetting.)

Although we're in the middle of public radio pledge week and you're probably already sick of being asked for stuff, if you can help out:
This Kickstarter campaign ends on Feb. 28, 2011, so please donate. I would appreciate it.