Last month, I had another bout of insomnia. Actually, it was another bout of waking up at 4am and not being able to get back to sleep, so I checked out the late night infomercial offerings.

For obvious reasons, I paused on one of the Spanish-language stations: 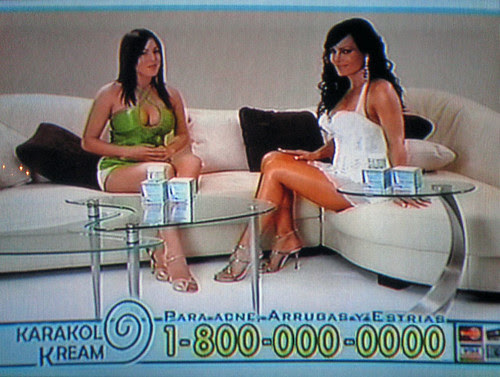 The Spanish-channel game show hostesses, news readers, weather girls, soap stars, and talk show hosts are almost universally hot, so why should their infomercial stars be any different?

This was some sort of pitch for "Karakol Kream," Karakol being a corruption of caracol, or snail. Apparently, their previous infomercial featured a CGI snail, but I guess they decided to focus on the leggy pitchmodels.

The woman on the right is Mexican actress is Maribel Guardia, though I was more focused on the one on the left; it doesn't show in the picture, but the cleavage showing through her strategically-placed boob window was glistening, perhaps from the judicious application of snail snot: 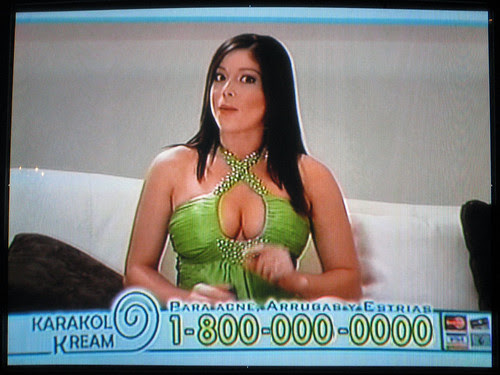 I find that infomercials in Spanish are a lot less irritating; if I focus, and can pick up some of the words and most of the meaning, but I just let it wash over me and concentrate on the visuals.

Surfing on, there's a new iteration of the "10 free Internet Web businesses" scam-thing that I first mentioned in "Big Tits and Bonus Checks" -- they don't mention the previously-ubiquitous bonus checks, and they switched from a living room set, to a pool party for all their successful customers yadda yadda yadda.

More importantly, they switched pitchwomen, and there's no longer any mesmerizing cleavage [Update: more info at the Ridiculous Infomercial Review]: 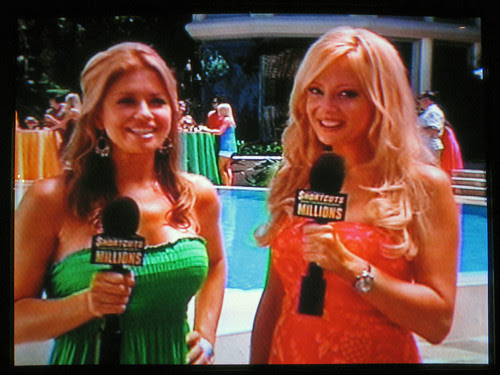 The success stories they feature and the pitch they're actually making remains inscrutably vague -- just the same "get rich quick with 10 free Web businesses"; I note that Hank Williams (not the singer, the Silicon Alley Insider contributor) also takes issue with the infomercial, though I would still venture that it still presents more of a business model than some Web 2.0 companies out on the market.

(Additionally, I see that he also uses the "Tic Tac (Blueberry)" theme for his Blogger blog.)

One of my goals for 2009 is to shift back into a reasonable semblance of East Coast time, so hopefully I'll be able to drastically reduce my infomercial viewing.