Friday night, I headed to Clyde's in DC, to meet up with some folks who were going to the Caps game.

I'd just gotten off the Red Line at Gallery Place, when the mass of people in front of me on the platform stopped abruptly. I looked over and saw an idiot teenager place a firework on the ground and light it. He was laughing as he hopped on the train.

The fuse sparked and smoked for a few seconds. The crowd gave it a wide berth, but didn't move. Then it went off.

The firework was some sort of roman candle thing, shooting off about 6 flaming colored balls. Some of them bounced off the train as it pulled out of the station.

It was all over in a few seconds, leaving just a cloud of sulfurous smoke in the station. 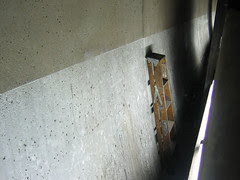 I would have taken a video of it (or the kid) with my phone, but I wasn't fast enough. Also, it was a good thing I saw the kid place the firework, or else there was an above-average chance I would have gone over the side of the platform to be among the Metro ladders and brooms. [Right: Mostly unrelated older photo.]

Now, I know teenagers are stupid, but how amazingly clueless do you have to be to light off a firework in the subway when people are still freshly fearful from Mumbai (to say nothing of London or Madrid), as well as the upcoming inauguration?

And of course, giving more ammunition to the random bag search proponents.