John is NOT my friend.

Here's a freebie for the Obama campaign -- "John is NOT my friend" t-shirts: 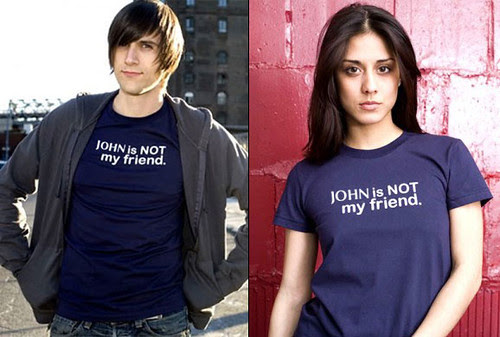 Somewhat subtle here, but for "JOHN," I used Optima, the same font the McCain campaign uses.
It's a take-off that works on two levels -- the first, obviously, is for anyone bothered by McCain's overreliance on the phrase "My friends" (going by some versions of the presidential debate drinking game, you'd be completely hammered on this one alone).

The second, deeper level is for the MySpace-savvy (playing to younger folks, one of Obama's strengths), who would know about the "Tom is NOT my friend" parody t-shirts that came about as part of an anti-Tom Anderson/MySpace backlash (I know Busted Tees had them, though I don't know if that's where it originated. They don't carry them anymore, though. Here it is.)

I did watch (well, listen) to the debate. I giggled at Obama's "green behind the ears" comment, but I'm a fan of mixed metaphors. Especially purposefully mixed ones, though I don't think that's the case with Obama here (Especially since that kind of nuance is, at best, wasted in a debate setting. Yeah, I'm an elitist.)

Also, I was amused by Tom Brokaw having to tell a candidate (Obama, I think W0zz says it was McCain), to move because he was blocking the teleprompter during Brokaw's closing script.

Tags: john is not my friend, parody, myspace

I only saw a bit of the debate - got home late, couldn't keep eyes open - but Obama really got him on the "bomb bomb bomb Iran" remark. ZING!

It was "Our Friend" blocking the teleprompter, not "That One"

I love it! I was so sick of the "my friends" comment by the end of that debate!