So, a Rabbit Walks Into a Bike (and other events)

It's been unseasonably warm for October, so I ventured this afternoon into the weekend sunlight to skate. I preceeded this with a trip to the gym for a bonus beach muscles workout, which is a necessity if I'm going to complete my Michael Phelps Halloween costume.

(I'm not actually going as Michael Phelps. It'd be a simple costume, but I don't want to shave my bikini line. Also, I get cold easily. And, while I do have pectorals again, it's a long way from here to there. I did, however, get a costume inspiration Saturday night, so I've been shopping around for materials. Though I haven't actually, you know, formulated a plan yet, which is always a winning strategy. But I do know I need to buy a heat gun.)

Anyway, conditions on the trail were good. I started on the W&OD trail in Reston and headed east, which of course meant hitting the annoying hill at Buckthorn Lane (which features my favorite sign): 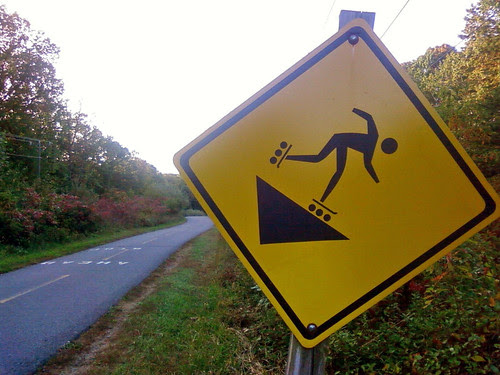 Actually taken coming back (westbound)
Nothing too eventful on the way out, and I turned around at Vienna. On the way back, I saw a bunch of vultures perched on a power tower, though the most notable thing happened back in Reston. There was an oncoming biker about 50 feet ahead of me, when all of a sudden, a rabbit darted out from the side of the trail and ran smack into the guy's back wheel.

For a bad moment, I thought the critter was going to get caught up in the works, but it just bounced off and scampered back into the brush.

I made it back without further incident. Afterwards, I went to Home Depot for some materials (did you know a 10-foot length of PVC pipe will bend just enough so I can fit it completely inside my car?), then to Harris Teeter (always a good idea, food shopping when you're ravenously hungry).

Afterwards, we went to Jackson's Mighty Fine Food, which I didn't even know was there -- it was a parking lot a few months ago. It's a Great American Restaurants joint, so it's done up by the same folks who do Sweetwater Tavern and such (and looks it).

It was muy crowded -- we were surrounded by Stiflers (and the cougars who hunt them) -- though don't wear a baseball cap, else you'll be told to remove it (I suggested using it as a strategem to get a drink order in faster).

I think I packed it in before midnight, so I missed the excitement just up the street -- according to the Post, just down Sunrise Valley from me, a driver went off the road, hit a tree and flipped, killing him. Owwie. I predict more speed enforcement, and maybe another DUI checkpoint, in the neighborhood in the near future.

As to the rest of it -- the costume will involve some crafting, some engineering, and some construction, so we'll see how that goes.

Cycling on W&OD the other day, I had a chipmunk dart out and directly into my path, quicker than I could even think about braking. I nicked him with my rear tire... I felt it too. I couldn't bring myself to look over my shoulder, though.

Coincidentally (and I'm not saying it was you), there was also a roadkilled chipmunk on the trail near the Sunrise Valley intersection.

Cute sign, do they mount it rotated 90 degrees left for the uphill portion of the road?
:D