A Double Fistful of Worms

Going through the recent memory cache, here's an item I bookmarked last week (I have some interstitial time right now, waiting for some chicken to cook before I head out to a Halloween-y party): It's about the science behind worm fiddling, where people harvest worms by vibrating poles stuck in the ground, driving the worms to the surface.

Researchers figured out that it works because the worm fiddlers are imitating vibrations made by moles, scaring the worms to the surface. But that's not important. What's important, is the horrifying picture that accompanies the article.

To blunt its impact, I have taken the liberty of contextualizing it as a Lolthulhu: 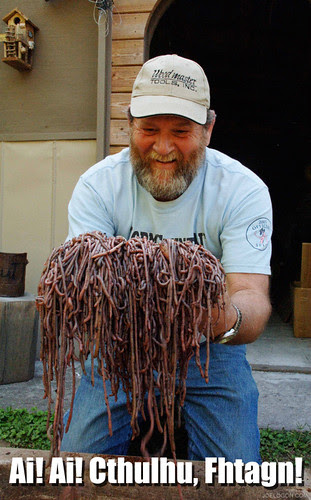 "Ai! Ai! Cthulhu, Fhtagn!"
I'm not particularly squeamish when it comes to wormy things (I can bait a hook), but that's just creepy.

I'm also not particularly steeped in the Cthulhu Mythos, but I thought it was somewhat fitting. (A Flying Spaghetti Monster treatment would also have been acceptable.)

In the interests of enhancing calm, here's a "Hay guise!" pic, made from a cute-ish pic of a worm-nemesis mole also in the article: 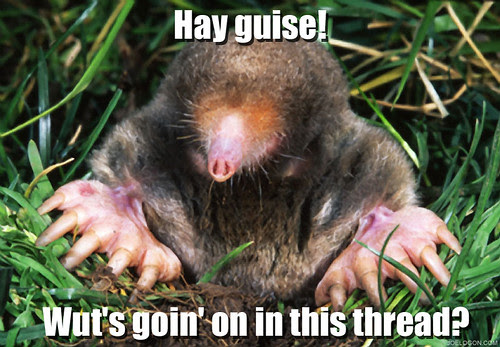 "Hay guise! Wut's goin' on in this thread?"
The Internet. Serious business.