The Industry Standard blogger Jordan Golson has an item today taking bigshot tech bloggers to task (or, more accurately, taking bloggers at bigshot tech blogs to task) for committing attempted journalism without actually doing any of the "journalism" bits -- "A lesson for bloggers: go to the source or look like a fool" [link via Fark].

It's about some "OMG, Congress wants teh iPhones!!!" misinformation that was primary sourced at an article on TheHill.com, then batted around the tech media blogosphere with lots of punditry and very nonexistant fact-checking. 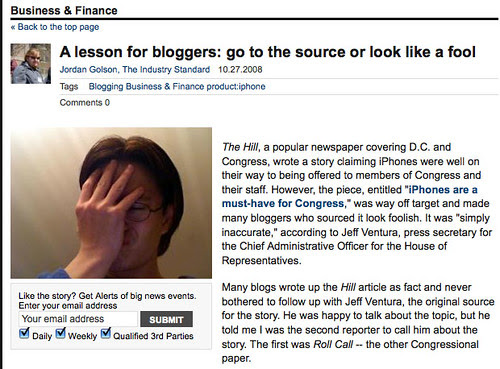 D'oh! I mean, woo-hoo!
This is the first media use of it I've seen since I noticed the photo made it into Wikimedia Commons (and it's properly attributed too, at the end of the article).

Additionally, here are the Fark tie-ins: I saw the article where it was greenlighted on the Fark main page; it quotes Drew Curtis (and mentions his book); it links to Fark, and it uses the creative commons-licensed photo from (and of) a Farker. So it's like a quad-damage bonus that's worth... precisely nothing.

BoingBoing updated with a correction, but of the other linked tech blogs -- all of whom originally reported the story with varying degrees of righteous indignation and/or wish fulfillment -- none of them did a correction or followup that I could see (from the article, Ars Technica, Wired Gadget Lab, Gizmodo, ZDnet, CNET's iPhone Atlas, The Unofficial Apple Weblog, PC Mag (via Gearlog), a quickie mention in the LA Times Technology blog, Cult of Mac, and iPod Observer).

This is just using a citation as an appeal to authority, and it's nothing new, of course: It's how things like the Super Bowl domestic violence myth perpetuated itself, and it's gone on in academia forever (who traces a citation all the way back to a primary source? If you see something cited enough, it becomes its own source, very much how a lie told enough times becomes the truth.)

Of course, me: I didn't do any fact-checking either, but I'm not a journalist, and I'm not much by the way of media -- I'm just a cat-blogger (sans cat) who just wanted to brag about one of my photos.

However, looking at some of the blogs in that list, that are either associated with "real" tech journalism or trying to make a case for legitimacy in that space -- how many of them can make that claim? Folks, if you want to play journalist, you have to act like one. Just saying "I'm just a blogger" isn't going to work unless you want blogging to forever stay the junior varsity dumping ground of media, somewhere above tabloids and below the main stream (or was that the other way around?)

I know, it sucks -- having to do all the new media stuff like transparency, authenticity, and responsiveness, then having to do more traditional media stuff like "sources," "requests for comment," "factchecking," and "ethics" (such as they are) -- that's a pain in the ass, as opposed to just snark and punditry.

This all kinda makes me giggle. I love it when pseudo-journalists get caught with their facts down. Number one rule of J-School, check your facts.

Next you'll tell us that voters should be well-informed or some such elitist nonsense.