I should have mentioned this last week (when it would have been mildly relevant, since news of the Steak & Ale bankruptcy had just come out), but I worked at Steak & Ale the summer after I graduated from college.

I was doing an internship in NYC weekdays, then working part-time nights and weekends as a prep cook. It mostly meant making salads, so I learned how to use a chef's knife properly (at least, when it came to vegetables.)

Anyway, I still have the t-shirt: 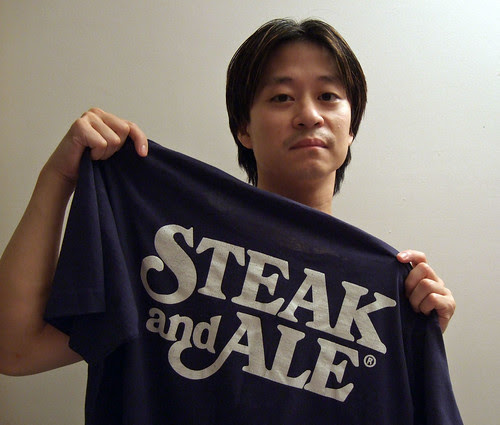 I never did eat there, though.
In other followups:

* The smell emanating from the Tegaderm bandage covering my road rash has progressed from sweaty fat guy to dead, sweaty fat guy. It's seriously making me ill. Fortunately, it's starting to itch, so I don't think I'll need it for much longer.

* DCRTV reports that 94.7 The Globe will be switching formats back to classic rock. If true, this means that my prediction wasn't wrong -- just late. (Eight months late.)

* In spite of my earlier doubts, it looks like I will, in fact, be headed to this year's Virgin Festival. So I got that going for me. (To keep things even, I missed out on Saturday's Fark Party at The Big Hunt, which I had been "definite" for, due to two competing birthday parties sandwiching it.)

* DCist notes that the City Paper reports that the WAKA vs. DC Kickball suit was quietly settled back in April. Commenting representatives of kickball365.com (Motto: "A forum for people who take kickball way, way too seriously") haughtily note that they reported this in May, to a resounding chorus of chirping crickets.

so do you just peel it off? does it hurt? i dont understand this tegaderm stuff. but it sounds like it smells pretty rank.

Yeah, I took it off this morning. It came right off, no problems.

It doesn't really start to stink until it dries out. When it dries out, you can take it off, because it's not oozing anymore because the new skin has formed.

Trust me, it's a lot better than having to change a gauze dressing that's stuck to a scab. Ugh.

Not that I mind classic rock, but I rather like the current Globe format. Ah, well....... it was a grown-up WHFS wanna-be, anyway. Life moves on.
Be careful with your bandages / wound......