I was going to go to the gym today, really I was. But then I saw this on the front door: 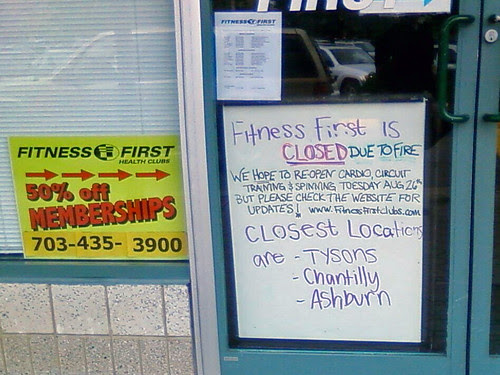 I guessed that someone was just too darned fast on the treadmill, though a fellow thwarted gym-goer suggested it was due to a fat lady wearing corduroy pants, which I find unlikely.

I've been to the Fitness First in Tysons Corner a few times, which is close to my work site. It's newer, bigger, and nicer, so it works out pretty well -- I can still get an afternoon workout before I head into Arlington or DC (for a change, it looks like I chose wisely).

Anyway, I went home and got my skates (which of course I'd taken out of the back of my car) and went on the W&OD Trail (my usual route, from Reston Parkway to Route 28 and back). It smelled like rain, so I almost cut it short early, but ended up sticking it out. Yay, me, although my feet hurt now.

an excuse doesn't get any more golden than this one... but good for you for going skating anyway!

Caveat: Excuse not valid if you lit the match.