We went in undefeated (which I was a little ambivalent about -- did we really want to be "those guys" in a social league?), but it was a close game -- a real pitcher's duel. I fielded first base, had a few good catches and fielding plays and otherwise didn't screw up.

Both teams were scoreless going into the 7th, so overtime rules went into effect, with batters getting 1 strike, 1 ball, or 1 foul (2 for women). That was a little stressful, especially since I hadn't been kicking well. But somehow I got on base, got advanced to second (taking a kickball to the face in a veeeery close play), then got RBI'ed in for the winning run, which was pretty cool. And then we celebrated at the bar.

In the third or fourth inning, though, I'd slid into second base -- not only did I still get out, but I got another raspberry/road rash for my trouble: 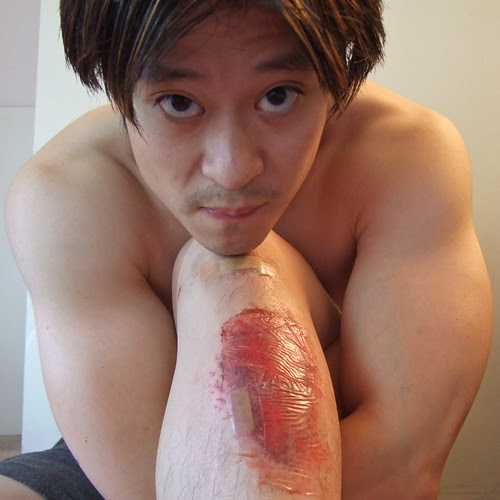 Emo road rash guy.
It wasn't too deep, but it was enough to make me not want to slide again, which is why getting to second in the 7th was a lot closer than it should have been.

Wound Care: Treating Road Rash With Tegaderm
I got one of my first kickball raspberries in 2004. After that, I started wearing long socks and was okay for a while, though that didn't help me in 2006 (which is also when I learned about using Tegaderm instead of ointment-and-gauze).

I didn't rock the long socks this season because it was a more relaxed league. Silly me.

The abrasion wasn't that deep, so when I got home, I thought I might be able to get away with a spray-on liquid bandage. You know the kind that doesn't sting on open wounds? I had the other kind. It wasn't fun.

The next morning, I saw that I needed a more substantial covering, so I re-cleaned the wound and covered it with two 2-3/8"x 2-3/4" sheets of Tegaderm that I had, patching them with a couple waterproof band aids.

If you read what's out there (search tegaderm road rash -- you'll get lots of biking and skating forums) you'll see the theory behind using the plastic bandages -- basically, it keeps the wound moist so a scab never forms -- it'll grow new skin faster, with less scarring.

In practice, it's like having a big plastic blister, especially when it starts filling with ooze. And, it's transparent, so you can see what's going on. It's really gross. Especially if it leaks -- it can get pretty rank. Which is why you also might want to cover it with paper tape and gauze.

Mine was starting to get gamey by Sunday, so I decided to upgrade to a larger bandage -- 4"x6", with padding in the center (they sell them in single packs for $4 at CVS -- it's worth it -- I didn't know they carried them in the larger sizes).

The pad also covers the wound, so you don't have to look at it so much.

Anyway, I'm using this as an excuse to take a break from working out. But a few more days and I should be back to normal.

Wow, that is a pretty nasty rash. I run a website www.gnarlyinjuries.com & would love to feature your pic on my site. Please send me an email to gnarlyinjuries@gmail.com at let me know if I can post it.