Probably the AOL perk I miss the most is easy access to the well-appointed, on-campus fitness centers. (Not that I used them much in my last few months, but still.)

So I'm currently (not to mention finally) in the process of auditioning a new gym, which I haven't had to bother with since the McBurney YMCA in NY a few speculative bubbles ago. (It was a nice setup -- after work, I'd take the bus down from midtown, work out, then use my transfer to go crosstown to my place on 20th.)

I visited a couple of the local gyms last week, looked around and got free passes. I went to the first place on Friday, did an extremely lame and light full-body workout, and yet still managed to knock the legs out from under me.

Today, as I was heading into the second place, I discovered that I had left and lost my lock at the first place.

Now, I have a few extra combination locks at home (I even have the combinations for some of them), but I didn't feel like driving back. Luckily, there was a sporting goods store next door that had them for a higher-than-usual markup, so I bought one (remember, stupid should hurt -- or at least cost).

Unlike the duplicate CD caper, though, you do not get any benefit from this dumb move -- although you can have my old combination in case you run into my old lock (it's purple): 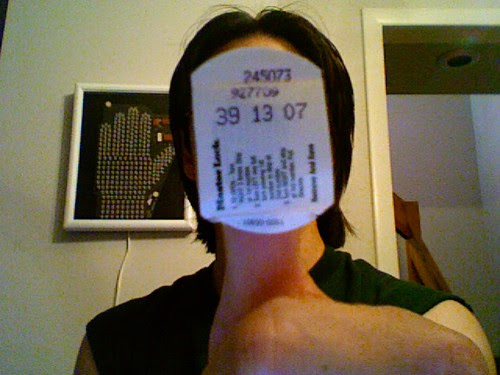 (Incidentally, I know that it's trivially easy to make a padlock shim out of a beer can.)

Now, as to the Reston health club offerings, here are my capsule reviews:

Reston Sport and Health
Positive: Lots of machines (though some are older, uncomfortable, and, frankly, just look like filler). Close to the W&OD Trail.
Negative: Bumpy parking lot. A little hard to get to during rush hour (though I suppose that goes for practically anywhere around here).
Neutral: Open floor plan.

Fitness First Reston
Positive: Free weight area set apart a bit. They have a machine setup I'm used to, plus headset audio for the TVs in front of the cardio machines. Can use the other locations.
Negative: On the small side -- a little cramped (though the space is well-utilized). Plus, it's in Plaza America, so parking can be tight at times.
Neutral: Looks like it has its share of both meatheads and hot chicks.
Perverse: It's on the second floor -- and the main way up is an escalator.

Reston YMCA
Positive: Big, lots of machines. Indoor running track and basketball court. Swimming pool. Lots of programs and activities.
Negative: Very pricey. And I'll probably never use the programs or pool.
Neutral: Right next door to Chipotle. (Better make that a negative. The Fitness First is right next to a Five Guys, with the pizza place and Baja Fresh just a few doors down, so I guess that's even worse.)

Health Club of Reston
Positive: Convenient location across from Reston Parkway.
Negative: No longer exists.
Neutral: That about covers it.

There are a few more possibilities, though I don't see myself as a Gold's person. I'm leaning towards the Fitness First -- it's marginally cheaper and open a little later. But whatever happens, I'm sure I'll be fit, ripped and huge shortly.

If anyone has any opinions about Reston/Herndon fitness club options, leave a comment.

I just moved to Northern Virginia and have been looking for the best gym to join, I am going to go with Fitness First as I find more positive reviews than negative. Thank you for summarizing the points for other gyms as they have been helpful :) Good Read!

Glad to be of assistance. If you haven't already, be sure to take a trial at each of them.

I'm still happy with the Fitness First, especially the ability to use all the club locations (well, primarily Tysons, which, because of the location, I will keep using occasionally even after they fix the fire damage in Reston [next week])