Skate or Blog: Choose One

I'm so out of shape right now, when I go skating, it wipes me out for the rest of the day. And for a good chunk of the next day. Which is probably one of the reasons I haven't posted for a while.

My first time out this year was in Baltimore, for the Kinetic Sculpture Race (the photos of which I still haven't done up yet). It was a sink-or-swim kind of deal, since it covers about 15 miles over the course of the day, but I made it. (More or less -- but were my feet sore.)

I went out again last Wednesday afternoon, starting at Sunset Hills and going west just past Herndon. Not too far, but my legs were still dead from a bike ride on Memorial Day Monday (only Reston to Vienna, but the hill at Blackthorn Road coming back wiped me out).

I also wanted to do a trial run on skates using my Poor Man's Steadycam, but I ended up just hauling it around in my backpack to get a sense of the weight (it's not a delightful experience). Though I did take a few video test shots just holding my camera -- kind of a "before" shot for comparison -- it's pretty unwatchable because of all the side-to-side motion (until I get to the coasting part):


Leaving aside the fact that it would be kind of, you know, dangerous, to try skating at speed while hanging on to the rig with both hands, I'm hoping I can still use it while coasting on flats or mild downhills. Which would make me kind of a human steadycam dolly.

During the ride, my bearings were making a lot of noise. I figured I'd thrashed them pretty good in Baltimore, so over the weekend, I took them apart to rotate the wheels, and clean and regrease the bearings: 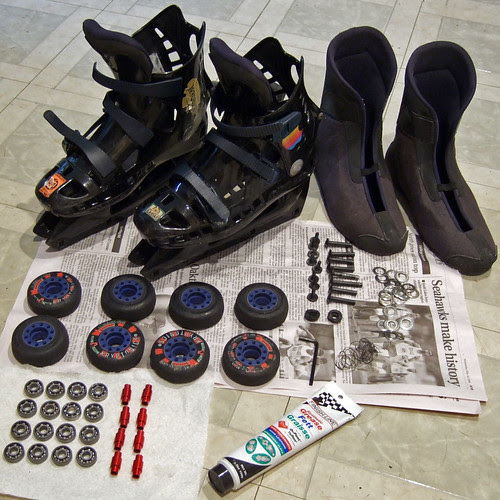 Skate shell, booties, wheels, bearings, shields, clips, spacers, bolts and grease.
Here you can see my current, first, and only skates: Rollerblade Coolblades, which I bought back in 1994 or 1995 for about $300 (with pads). I've taken them up and down Manhattan, through the Central Park loop countless times, up to Niagara Falls, and out to Iowa. They've held up surprisingly well -- I've only replaced the wheels and bearings a couple of times.

They still pinch at the base of my shins, but I'm pretty used to that by now (bloody socks and all). Though I'll think I'll eventually switch to a traditional lace-up boot, maybe jump over to K2s (K2 still makes skates, right?)

Here's a macro shot of one of the bearings: 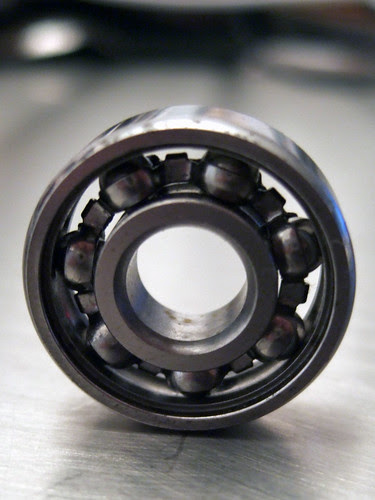 Degreasing brought to you by Simple Green.
Anyway, I and my now-clean bearings went out again on Monday, starting at Sunset Hills and going west. I got a late start (6:20ish), so I figured my turnaround time would be 7pm, giving me enough margin to get back before safely before sunset (even if I gassed out).

At 7pm, I'd just made it to Church Road, which is just close enough to the Route 28 overpass that I decided to stretch it out a little more. Although I wasn't able to do a full speed run on the overpass's westbound downhill (which is still one of my favorite things to do -- it's no Central Park "Big Hill," but it has a nice, long, straight rollout), since there was an inconvenient bit of gravel on the trail.

I eventually made it back with time to spare. Again, only about a 15-mile round trip. But here's a tip -- if you're going to be skating close to dusk, try to keep your mouth closed. (Bugs -- ptooey.)

OMG, are you trying to TORTURE your readers?? You blog about the 3 nipple-thingies you bought, then the steadycam, now this footage *without* the steadycam.... DO THE STEADYCAM THING!!! HURRY!!!

Then invent how to rig it to a bike please.
I just rode around my neighborhood stopping every half block to take stills (in my "My Beijing" picasa album, at my blog).

and adam sandler wasn't waiting at the bottom to trip you with a stick? phew!

skating is great exercise and so fun, i have a pair but can't seem the relax on them... so i leave 'em in the closet.

anyway - i will be looking for you out on the trail!