Frozen Water Is Going to Fall From the Sky. And We're All Gonna Die.

However, the two events will hopefully be unrelated.

I have a lot of catchup blogging to do, mostly from the We Media Miami conference that I attended last week. In Miami.

You know, when I left, it was 80 degrees. In Miami. That being where I was. Miami, that is.

It's kind of an odd place. When you look at a pretty girl, she will, many times, smile back at you. It's unsettling.

Also, the weatherwomyn on channel 7 is named Elita Loresca. She is kind of hot and has an enormous grasp of meteorological phenomena: 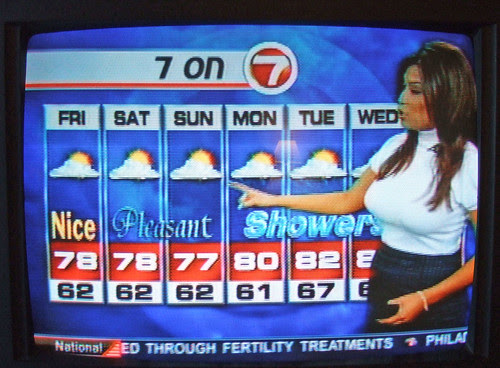 I don't remember what the forecast was. It was probably in the 70s and sunny. Because it was Miami. Also, evidently, I like to take pictures of large-breasted women on the TV.

In case you didn't think Ms. Loresca was also a serious weather forecaster, she did a photo shoot for FMH.

Finally, in case you missed it, here's this Sunday's Candorville. It's bittersweet and describe kind of how I feel about this entry, and others like it:

I voted for you a couple of times.

Large-breasted weather girls are always a joy to behold!