Thursday night, I was listening to CBC radio show As It Happens; they were talking with Boston Globe columnist Brian McGrory, who was at the press conference/farce/performance art by The Mooninite Two, Peter Berdovsky and Sean Stevens.

McGrory was somewhat peeved, since the two clowns weren't sufficiently contrite at their press conference to soothe ruffled feathers caused by the ridiculous overreaction of the Bostonian homeland security apparatus.

However, he put this up in Bostonians' defense -- that Boston is particularly sensitive to terror concerns because of what happened on September 11th.

"Before you make fun of us, you've got to remember that two planes on September 11th took off from Boston and we are particularly sensitive about these kinds of things."

Ah, I see -- because two of the 9/11 flights took off from Logan (and one of them was essentially a terrorist lay-over), Boston has been particularly victimized by terror and should get special consideration.

Generally speaking, he seemed to be a reasonable with most of his other points, but he falls off the deep end again with this homer howler (7:50):

"It's a really tough call on whether somebody overreacts or underreacts. Obviously, Boston is the only city that reacted like this, but Boston also has a tough history with terrorism in America."

Unless Boston had some spate of domestic terror in the 60s or 70s that I'm overlooking (or maybe he's counting the Big Dig as terrorism) I would suggest that McGrory and the rest of Boston just take their lumps on this one, instead of trying to play the "9/11 affected us particularly hard" card.

In other words, shut up, you sound like a douchebag: 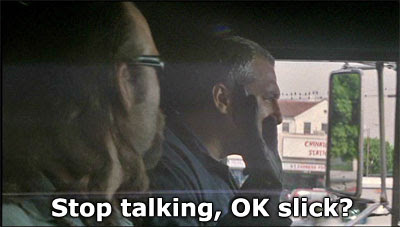