I gave up on ABC's Quantico before the end of Season 1 because it got too ridiculous, but it doesn't mean that I couldn't still make a Halloween costume from it.

As many have noted, the trainee outfit is built around a light-blue, long-sleeved henley t-shirt, with khaki cargo pants (optionally bloused/tucked), combat boots, red training gun in holster, and a badge.

There were plenty of reference photos:

The onscreen blue henley is four-button, waffle-textured, and way too expensive for a long-sleeved t-shirt, but I was able to find an acceptable substitute for $15 on Amazon. The shade was "eh, close enough."

(Incidentally, if you Google search on "light blue waffle henley shirt," there's an important two-word phrase in there that may pull up some verrrrrrry different search results than you might be expecting.)

I had everything else (after spray painting red the toy gun from my 2010 sheriff costume), and made the badge in photoshop: 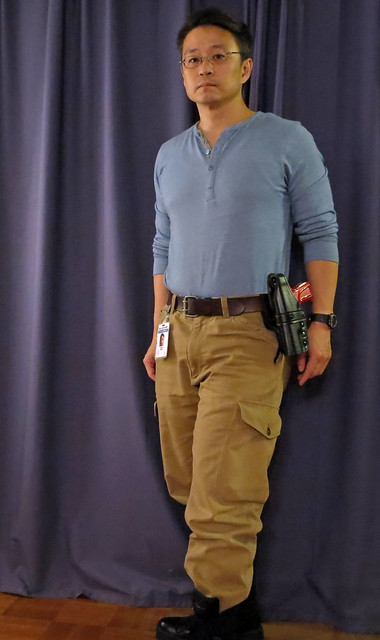 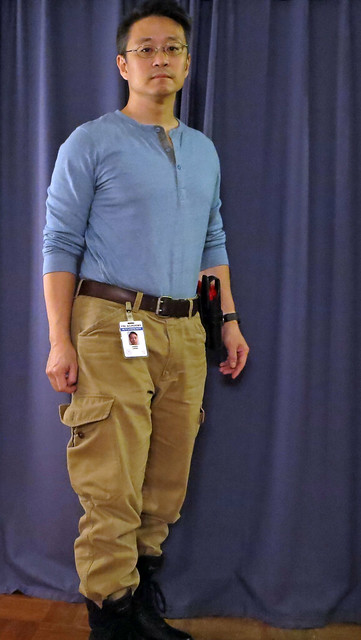 As to the finished product, over three wearings in three days, exactly two people knew what the costume was... and one of them was an actual FBI agent. Also, the holster is a pain to drive in.

So, I've used up my fallback costume, which means that I have a year to come up with something for 2017.