Everything I Learned About Combat Resupply, I Learned From Video Games

I'm 100% civilian, I'm lazy, I hate carrying heavy things, and my knees hurt terribly after I run more than a mile. So that makes me uniquely qualified to tackle the challenge of lightening the load that soldiers have to carry.

When faced with a problem like "The stuff our troops have to carry is too heavy," naturally, as Americans, we immediately look to expensive, ridiculously complex technological solutions like robotic, all-terrain golf carts (okay, fine: the unmanned ground vehicle prototypes are more like 6x6 Gators), the ever-creepy Big Dog robot; the HULC exoskeleton (with integral links to Skynet), and airdrops from GPS-guided parachutes and cargo helicopter UAVs (like the A160 Hummingbird and KMAX).

Ammo From Heaven
Actually, that last bit is kind of interesting -- if you use unmanned airdrops to resupply troops on patrol and not just static bases, not only does it apply just-in-time delivery to the tactical realm (and give it a whole new urgency), but it also seems a lot like the mechanics of your standard video game powerup.

In the Halo games, you get resupplied at points by endoatmospheric resupply canisters and orbital drop pods (though given the current state of rocket lift systems, the latter system's price would seem prohibitive).


Cache Issues
And then once you get into videogames, it's all over. I was reminded of the resupply scheme in the Ghost Recon video games: In the earlier versions of the game, resupply cache points for re-arming are basically ammo crates that look like footlockers.

By Ghost Recon Advanced Warfighter, though, the resupply points are self-powered, computer-locked, armored mini-dumpsters that act like vending machines: 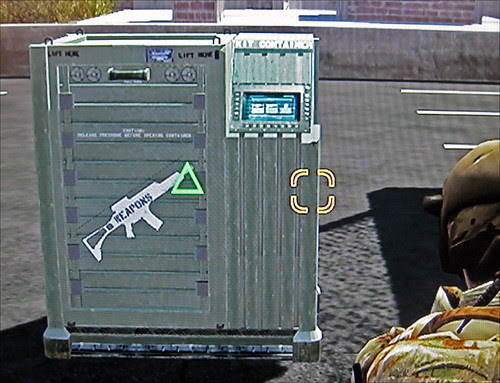 Kit container in Ghost Recon Advanced Warfighter.
Although they were dropped off in the middle of a conflict zone by some unknown, elite  pre-positioned supply corps, they're not hidden -- they sit right out in the open -- presumably protected by computer locks and thick armor. But otherwise, they're a high-tech spin on your basic supply cache.

Could something like this be used in a real-world context (say, in the mountains of Afghanistan)? What are the issues:

* Accessibility: If you forego the fancy computer locks, you don't need power. But you still need to be close to a road, or if airdropped, at least be accessible enough to patrol areas so that your friendlies can get to them. If it's accessibly to your friends, it's accessible to your enemies. And face it, the locals will presumably figure out when you've dropped something off.

* Security: If you don't use concealment, you need armor. Don't use enough armor, and they get trashed. If you're lucky, the contents only get stolen or destroyed. If you're unlucky and don't have tamper-evident seals, the contents get sabotaged, to fail in catastrophic ways at inopportune moments.

Too much armor, and they turn into mini-bunkers difficult to transport, which defeats the whole purpose.

Plus, even if they were invulnerable, you could just booby-trap the area around them and get the poor suckers who are coming to resupply.

How could you mitigate these issues?

* Pay for Protection: Assuming the items are relatively protected and tamper-evident, drop your supply locker in a not-actively hostile village and pay the villagers to keep an eye on it. Of course, that marks you as a collaborator (or at least someone who acquiesced)

* Continuous Monitoring: Either have them self-powered and tied into a network for surveillance and status monitoring, or assign a persistent monitoring method -- say, a tethered aerostat or UAV -- armed, even, so if anyone tries to mess with it, BOOM GOES THE DYNAMITE.

* Self-Defending: Booby-trap your cache -- make the outer casing a big anti-tamper, anti-personnel shell -- like, say, reactive armor, and if someone tries to get at it without proper authorization... Or if you tie it into a supply cache/sensor network, make it command detonated.

Anyway, the vending machine in the middle of nowhere seems a bit silly. (At least, until you can self-power them and stick an Aliens sentry gun on top.)

In some followup entries, I'll be spitballing through some new old ideas for mitigating soldier loads.

This is the sort of stuff that should be on a certain site that you may, or may not be associated with. It's real, people love real. It speaks to another audience.

I'd considered it, but it's more of a Danger Room/DoD Buzz/SWJ-type post. I have other items teed up in my head that have a more direct GovCon tie-in.