My Photography Featured in The New Yorker

I saw on Saturday that one of my photos was featured on the web site of the prestigious magazine, The New Yorker: 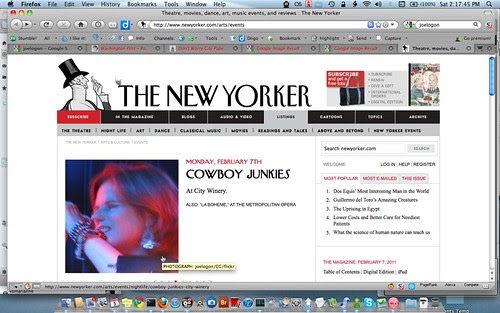 If you want to get technical, or be "accurate," the photo was just illustrating a listing on The New Yorker's Events page, for a Cowboy Junkies concert (tonight, Monday, as it happened) at a place called City Winery in SoHo. It's a closeup of Margo Timmins that I took at the Cowboy Junkies show at the State Theatre last April.

It is not, I freely admit, a particularly good picture -- what is important, is that it's licensed  Creative Commons, Attribution-ShareAlike 2.0 Generic (CC BY-SA 2.0), under which I post most of my Flickr photos, without that often-vexing "noncommercial use" restriction.

Since I'm not a professional photographer (very obviously), getting a vicarious thrill from having other people use my photos is the only kind of compensation I'll ever get from them, which is why I license them that way. (Model rights and the like still apply, so you won't see them used in, say, an overseas advertising campaign. At least, you're not supposed to, and if it happens, you can take legal action against the publisher -- not me -- if it happens.)

At least with the attribution requirement, I can find when people are using my photo when I do a Google search on my name or Flickr username.  By making it pretty easy for other people to legally use my photos (just give me attribution, and flow down the license terms for any derivative works), I can pretty easily see where my photos are being used. (Image searches like TinEye exist, but I'm not going to image search my 8,500 Flickr photos.)

I've talked about my mullet and facepalm photos being used to illustrate the respective Wikipedia pages, so I won't get into that again. When it comes to bands, though, I'm happy to report that a few of my concert photos have made it on to the relevant Wikipedia pages. Again, it's a function of being liberally-licensed and well-tagged (so they come up in relevant searches), with a few of them that are actually not horrible photos (I'm strictly a "blind squirrel" snapshooter):


In my own small way, I'm adding to the cultural conversation. Or at least helping to illustrate it. And by requiring attribution, I can find out about it.

It's not really a "congratulations" kind of thing, but thanks.