I broke another Macbook power adapter (old-style); the original one broke at the base, where the skinny cord meets the brick. I was especially careful to wrap the cord properly to keep this from happening again, so naturally, this one broke at the tip: 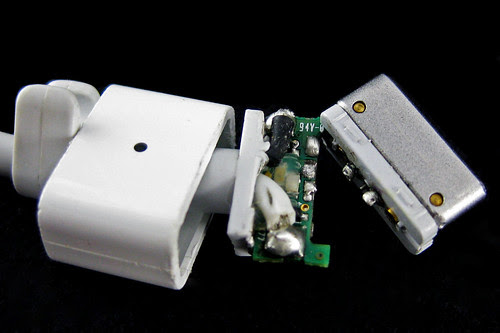 The newer adapters supposedly aren't as susceptible to this problem.
The dumb thing is that, because I didn't want to pay $80 for a new OEM power adapter, I bought a this as a used replacement off of eBay.

The dumber thing is that it still worked, mostly. And for about a week, I used it like this, just being careful to push it together to make the connection.

After a while, the blobs of solder connecting 120V of household AC broke off, so the jiggle trick didn't work any more. At least, not without the end of the connector getting noticeably hot, and even a little... shock-y.

Fortunately, I'd ordered a replacement. And that's the dumbest thing -- I bought another used (refurb) one off eBay.

We'll see how long this one lasts. If it goes, I suppose it'll mean it's time to upgrade to a new Macbook.

I went to the Apple Store a few weeks ago and they gave me a new connector for free. My friend told me it's because some of the old adapters are at risk of catching fire or fraying, so Apple will replace part of the cord for you. The actor who played the dad in Alias was at the Store that day (bonus).