Wanted: A Dumb Crisis Manager; Plus, Reviewing The Colony, Episodes 1 & 2

Ever since CrisisCamp, I've been mulling over ways we can leverage pop culture depictions of crises to get people thinking and doing more for their personal disaster preparedness. As we've seen, throwing preparedness guides up on Ready.gov just isn't doing it -- we can argue about why elsewhere, though I think it's because ready.gov gets us thinking about preparedness in the "scary way we prefer not to think about," as opposed to the "scary way that entertains us" that we see in pop culture.

Pop culture is awash in constant crises, ranging from earthly disasters like fire, flood, earthquake, tornado, hurricane, and pandemic; celestial hazards like meteors, comets, and asteroids; and man-made disasters running the gamut from terrorist attack, dirty bomb, biological warfare, all the way up to total nuclear holocaust and post-apocalyptic aftermath.

And of course, we can't forget zombie attack, alien invasion, robot uprising and every other monster incarnation.

Because pop culture crises are ultimately entertaining and diverting, people are more willing to engage them. So what can we do to leverage the power of pop culture depictions of crises?

Enter the Dumb Crisis Manager
One thing we can do, of course, is comment on how crises, disaster preparedness, and crisis response are depicted in TV and movies. Basically, I'm talking about trying to recreate Phil Plait, whose Bad Astronomy site rose to prominence by highlighting bad (and good) depictions of science and astronomy in TV and movies, and creating a personality who can authoritatively talk about these issues.

I'm pretty sure that person isn't me. And it may not be a single person. But I'll fill in until someone else steps up.

The Colony, Episode 1 (a.k.a. Real World: Thunderdome)
Right now, I'm two episodes into The Colony on Discovery. I don't think I'll make it to the third. Originally, I thought it might be interesting way to show useful survival skills (at least for the immediate aftermath period), but it's pretty clear now that it's basically Junkyard Wars-style engineering challenges, with a some fake Mad Max thrown in.

The problem I have with reality TV in general is that it's manufactured drama, and this is especially telling with The Colony: There's no prize at stake (that we know of), no one's getting kicked off the show, and there's no "game," so why do these folks insist on acting like typical reality TV meatheads? Worse, why make a show of swinging around sticks and pipes to fend off scavengers, intruders, motorcycle marauders (a recurring theme) -- did they sign a particularly permissive waiver that said they were participating in blood sport? It's just silly.

Anyway, here are the skills they show off in the opening episode. (The participants are foot-mobile, so they have no personal supplies to speak of -- no real lessons to be learned there):

Skill: Looting, fending off other looters: Useful as it may be (in the "collapse of civilization" scenarios that gets TEOTWAWKI types all hot and bothered), I would suggest that "grab anything that's not nailed down" isn't really a skill that needs to be taught.

Skill: Water Filtration: They gave a cursory demonstration of how to filter water through buckets with alternating layers of sand and charcoal, which was good. However, they glossed right over the post-filtration boiling part, though which was bad. Very bad. And even after that, I don't know that I would trust water from the LA River.

Reality TV moment: One of the early Survivors (maybe the first?) featured a conveniently-placed "natural" container of sketchy-looking standing water. Some of the cast worried about brain parasites and such, but the gameplayers realized that the show's producers wouldn't have provided water that they couldn't drink. So the reality TV safety net is in effect. Witness the disclaimer at the end of The Colony credits: 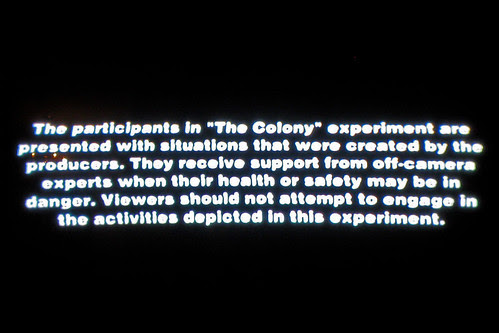 "The participants in "The Colony" experiment are presented with situations that were created by the producers. They receive support from off-camera experts when their health or safety may be in danger. Viewers should not attempt ot engage in the activities depicted in this experiment."
Skill: Flushing a toilet with a bucket: Really? Really? This is a big deal? Not only is it completely obvious to anyone whose water's even gone out (even briefly), but wasting gallons of potable water to flush toilets, instead of setting up a latrine in a corner of that big-ass compound of theirs, is idiotic.

Reality TV moment: Picking up sticks, pipes, and other beating implements to fend off a night-time intruder. Or else, you could, you know, have the cameramen shine their lights at them?

Reality TV moment: The addition of the second group of survivors. Again, if you see a group of people with a camera crew, it's a pretty safe bet you can let them in. At least one guy (the contractor who's also an ex-con) had a pocketknife on him.

Skills Challenge: Lighting. Good thing they just happened to have that bank of batteries and inverter, eh?

Reality TV moment: The cast is really engineer / mechanic heavy. They really should have included more deadweight -- even their IT guy came up with the water filtration method.

Skills Challenge: Rainwater collection. Wow, they discovered the rainwater drain pipe just as it starts raining. Oh, no: time pressure! What a coincidence.

Reality TV moment: Wouldn't be reality TV without blurred out genitals now, would it?

Summary: The first episode set the stage -- looting, motorcycle marauders, engineers gone wild. It gets worse in the next episode...

WTF moment: You know, people were able to do work before power tools. I, myself, used hand saws and a hand-drill back in shop class. Just wanted to point that out, in case you're ever faced with a choice between recharging your reciprocating saw vs. keeping the lights on in a survival situation.

Reality TV moment: Yeah, they're setting up cranky old guy for a conflict / redemption arc. At least in the first episode we learned he was having coffee / booze / tobacco withdrawal.

WTF moment: They move a step beyond looting, to actually stealing from other refugees. And look, they're getting fake worked up over fake danger from the fake motorcycle marauders (who, in voiceover, we learn can't actually hurt the Survivors... er, "Colonists", but they don't know that... DUM-DUM-DAAAAA)

Summary: As you can see, not much in the way of usable skills here, even more contrived Junkyard Wars projects, and even more contrived reality TV conflict. The talking head interludes add psychobabble and nothing else. And if that gassified wood-powered generator actually worked (without the magic of television), I'll drink some of that LA River water.

That's it, nothing more to see here. I'm outta here.

I think this is overly critical. It's entertainment. It's not designed to turn somebody sitting on his or her couch into full-on-survivalist-crazy mode person. I agree that it'd be nice if there were something to encourage folks to prepare adequately. However, I don't think that's anywhere in this show's mission statement.

Reality TV moment: The cast is really engineer / mechanic heavy. They really should have included more deadweight -- even their IT guy came up with the water filtration method.

srsly. I was curious. "12 people representing a cross-section of the population?" Yeah. Let's see. That'd be: a couple unemployed folks, somebody in retail sales, a cashier, somebody to make copies, the lunchlady, a nurse (check!), a waiter, a schlepper, somebody to answer the phones, a janitor, and a stockboy. Not an aerospace engineer, a mechanical engineer, and a computer scientist. However. Using my same criteria as above, I honestly wouldn't want to see the show with 12 people who are a true cross-section, so good decision by the show's creators.

Re: Being overly critical -- I know; I'm specifically looking at it from a hypersensitive preparedness perspective, so I'm doing a meta thing, using the show as an opportunity to highlight teachable moments.

Since show jumped straight into Junkyard Wars / A-Team / Thunderdome, there's not a lot of opportunity for that.

I actually would have preferred a regular reality-show treatment, with contests and prizes and such, which would have at least given them an excuse to act like overcompetitive douchebags, instead of this faux-experiment thing. (An alternative would have been a Frontier House-style show, which I would have preferred to the Junkyard Wars thing, though there would probably be fewer motorcycle marauders.)

So I'm thinking as tonight's episode starts, "You know, it's lucky they could find 12 people who didn't have to be on any sort of daily medication." And then I realized. Females. They have 4. They've been there 20 days. So unless they're all synched to the same week, they must have found a secret feminine hygiene stash in the warehouse next to the batteries. Now, I'm not saying I wish they'd gone into detail about it, but some sort of shot panning past a pink floral box in acknowledgment would have been nice.