The DCist writeup of the Breeders show Friday night at the Black Cat pretty much covers everything (much better pictures, too). Just a few things:

* Had to drive through some fairly torrential rain on the toll road to get there (microburst-y stuff, intense but it cleared up by the time I got on 66). People were going 40 on the highway. It was dicey at times.

* Got good parking just around the corner and got in a bit before they opened the upstairs doors. I got a beer in the Red Room and watched the neat, orderly queue, which featured many folks who had obviously first seen them in the 90s.

* The band was solid. They seemed like they were having a lot of fun, too.

* Did not realize at the time that substitute bassist Josephine Wiggs was in the original band, nor that she was also one half of Dusty Trails (a CD I picked up from the 88 cent bin at Sounds on St. Marks a long time ago, and that I listen to a lot)

* Did not get any good photos; was a little too far back. They were also enforcing the "no video" policy with a strobing flashlight (which I was tempted to counter with my own, but didn't) 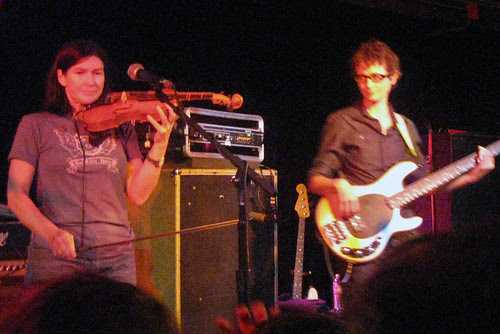 The Breeders' Kelley Deal on violin, Josephine Wiggs on bass.
* Was gratified that they got Cannonball out of the way early, even if it is a favorite. Hate to see signature songs cloistered away in encores. 9 seconds of it:

* As noted, stood next to some variety of man-child who felt it necessary to incessantly yell "Kelley!!!" as if she had forgotten her name, or was fending off the end of the world.

* They did leave us wanting more, in that the encore was a little lacking. But it was a good show.

I'm really sorry. I am the a$$hole that kept screaming "Kelly." How I even found this blog is amazing...I did a google images search for pictures of VA personalized license plates, and a picture on your page linked yours, and I immedately saw the Breeder's show review... then the comment about me. The last time they played here, Kelly had just reunited with the band after her drug thing, and at that show I shouted her name like that. After the show the band came out to greet fans and she said she felt really flattered that someone was screaming her name all night. So, I did it again, and when she came out back by the buses this time, she remembered me and gave me a big hug. She's gonna knit me a scarf. So I'm really sorry I was "one of those," but that's my story.

It was an amazing show! They played 2/3 of the songs I most wanted to hear, Do You Love Me Now and Driving On 9. The other one was Off You, but I realize that could have been a downer.