An Afternoon of Mild Disappointments

After a haircut this morning (not disappointing), I went to see District 9. I liked it (especially the parts where the bad guys go *splash*) but I was mildly disappointed by it, mostly because it had been hyped so much and I went in with really high expectations.

Parts of it were uneven, and parts of it felt like a standard buddy movie (even with aliens, it's fairly well-trodden ground). Everyone was interested in collecting and using the alien weapons (robot fighting suits!) except the aliens themselves, which was odd, though I guess an alien uprising would have been a different allegorical movie. And the The Nigerian gangsters felt like they were spliced into the plot to provide a convenient device.

Overall, the plot left a lot unexplained, in a very unsatisfying way. At least with Alien Nation (to which this movie owes a lot), we knew the Tenctonese aliens were slaves, which is why they couldn't go home. In District 9, the aliens have the means to go home -- one really smart prawn has been hiding the key to their return for 20 years, and they even have the fuel -- albeit in a form they need to furtively scavenge and refine -- like meth cookers -- from recovered bits of their own technology.

Anyway, it seems fairly well set up for a sequel. District 10, anyone?

Afterwards, I stopped by Reston Town Center to visit the new Apple Store. Though I missed the grand opening festivities, it was still loud and crowded. This one, I didn't have big expectations for -- after all, it's just an Apple store -- but it's also disconvertingly small. Narrow. Especially when compared to the nearby stores in Arlington and Tysons Corner. It doesn't take up the entire former Eddie Bauer store space (there's another store next door).

Then I stopped by The Counter for a burger. The space is shiny and nice, the staff is friendly, they have beer, and the burger is... average. Maybe "solid" is a better word. I would say overpriced.

The fries are shoestring style and good, though I guess I'm a french fry philistine -- my favorite is still the heavily-seasoned kind that come frozen in an institutional-sized bag. 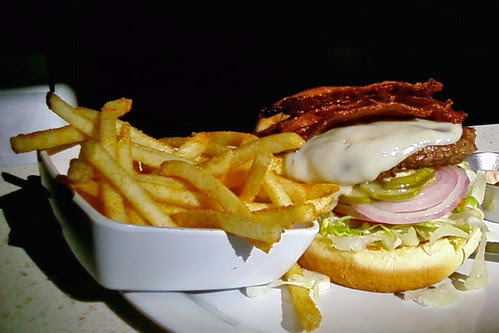 I still haven't been to Ray's Hell Burger yet, so the best I've had around here is still Joe's Burgers in McLean.