The Macbook Makeover Is Free, But the Wardrobe Upgrade Will Cost You

The case of my Macbook cracked on Wednesday, right at the spots where the nubs on the screen bezel contact the palm rests.

I didn't bother taking a picture, because it's a known issue and looks exactly like all the other Macbooks that have experienced the problem.

I scheduled an appointment at the Apple Store in Tysons Corner (which is the nation's first, incidentally) -- they took a look at it, and since it's an acknowledged issue, fixed it for free (even though it's out of warranty).

So, I've got a brand-new top case and keyboard, and screen bezel. It's almost a good thing that this happened, as my case had been getting awful grubby (because I'm a greasy, dirty person). Now, it's like having a new computer: 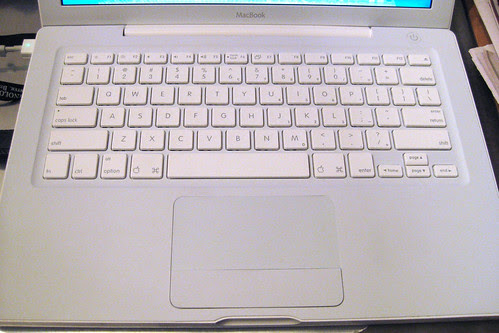 The dark spots are shadows, not dirt. Not yet, anyway.
My Macbook has been a real trouper (outside of the occasional unexplained kernel panic). I don't baby it, but I don't abuse it (outside of running too many Firefox tabs and windows) -- I may spring for more RAM and a hard drive upgrade, because it just works and I have no real need for a new model right now.

Anyway, I didn't get away completely free. I had to kill about an hour while the Apple Store Geniuses made the fix, so I stopped by Banana Republic, which I am somewhat chagrined to admit is the perfect store for me.

I usually just head straight to the back, to poach from the sale racks. Though this time, they were having a sale, taking 30% off all previously-marked down items: 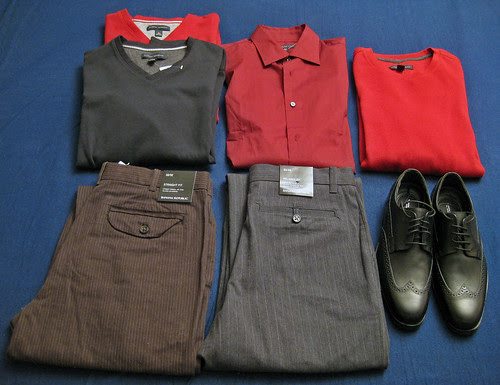 This is why being a guy rules. (Not least of which is, if you don't really care about fashion -- and why would you? -- you can pretty much wear clothes until they fall apart. Or you get fat.)

Incidentally, I would have gotten more things, except the selection of smalls is usually pretty limited. I have no idea what the Freakonomics blog folks are talking about -- smalls are pretty hard to come by, and I rarely see any XS clothes (some of which I can wear, some I can't), as opposed to XL and XXL stuff, which I see plenty of, and shake my tiny fist at.