Wonkette Editors Are Shameless and Lazy. But We Knew That

I guess I'm the last person to notice, but there's a been high correlation lately between the blog picks that show up in DC Blogs Noted and Wonkette's Metro Section.

In fact, they've been just about identical. (Ah, but pity the poor souls who are featured on DC Blogs, but don't make the Wonk-cut. I just made that up. I'm so clever.)

I'd first noticed this on the 15th -- Wonkette and DC Blogs are just a few tabs apart in my Local folder, and 4 of the 5 featured blogs were the same. I had a moment of deja vu before I figured it out.

On the off chance that it was some sort of baroque, creditless content swapping deal, I'd asked the DC Blogs folks about this -- Pat wrote back that they'd noticed Wonkette was using the same picks, but that they didn't care and that it just drove more eyeballs to the featured blogs. Win-win-win.

It's pretty obvious that Wonkette and others watch the live feed (which is what it's there for), but cribbing from the editorially-chosen selections of DC Blogs Noted, without giving credit, is a cheeseball move.

I know I shouldn't look gift pageviews in the mouth (DC Blogs listed my 9/11 Raisin Bran entry, which was then mentioned in Wonkette, tripling my usual pageviews and validating my heretofore worthless existence), but I hate to see Pat and the rest of the DC Blogs crew not get the credit they deserve for the work that they've done.

Of course, I would hate it more if the Wonkette folks bagged the live feed and picks out of spite. 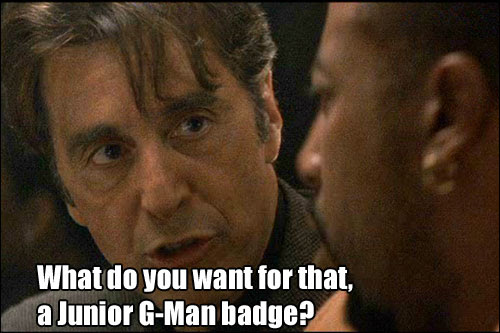 Vincent Hanna says: "Well, I am over-fuckin'-whelmed. What do you want for that, a Junior G-Man badge?"

OK, so I'm not crazy - I have been noticing that too! Good of you to do the legwork to at least try to find out why!
BTW, your Raisin Bran post WAS hilarious and definitely worthy of a mention on BOTH DC Blogs and Wonkette!

I noticed the same thing, finally, when a recent post of mine was picked up by Wonkette via DCBlogs. (I made a comment on DCBlogs noting the similarity.)

I'd really like to see Pat and the team get some credit for the leg work they're doing but I can't complain about the extra traffic.