The Ultimate Showdown Between Good and Evil, Enacted by Vanity Plates

On the left, a photo of a vanity tag of a Civic on Reston Parkway that I took back in April; on the right, a Neon in the parking lot of the Spectrum at Reston Town Center tonight: 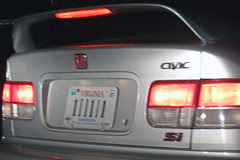 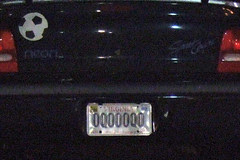 The Civic's tag -- 1II1I1 -- is pretty diabolical by itself. Why diabolical? By mixing ones and Is, if one of those 6-character tag owners is ever involved in an infraction that relies on a witness's recollection of the plate, they couldn't be certain of the tag number; with 64 possible permutations (26), they'd have to pull in each of the owners with a similar make.

But looking at it in a symbolic, binary way -- you've got ones versus zeros. Light versus dark. Civic versus Neon. If you smashed them together, who would come out on top? Or would it be like a collision between matter and anti-matter, where they annihilate each other and everything around them?

We must make sure this never happens.

Speaking of the never-ending battle between good and evil, you wouldn't happen to have a copy of that Top Ten list we did way back when, would you?

I think I have the old top 10 lists somewhere, but finding them may be a whole nudder thing...