Fighter Jets Over I-66, and a Housewarming Bar Crawl

Saturday, I went to a housewarming party/bar crawl in Arlington.

On the way in, I was on I-66 (actually, the part of the Dulles Toll Road just before it runs into 66), when I started wondering why I was hearing jets, since the news story I was listening to didn't have anything to do with planes or the war.

I turned down the volume and realized that it was actually a jet. Low-flying, too, since it was pretty loud.

I opened the sunroof to look up, though that wasn't necessary, since I saw out the front windshield that it wasn't one plane, but a flight of four fighter jets (I think F-16s) flying out ahead.

Anyway, after that bit of excitement, the party was pretty good. The housewarming theme was "Stock the Bar", so guests were asked to bring a bottle of liquor.

Depending on the drinking habits of your particular group, this could be a net gain, wash, or net loss for your liquor cabinet.

To be honest, there was more housewarming than bar crawl, though we did make it Dr. Dremo's, where there was a dog: 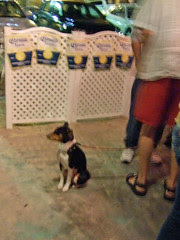 Then we walked over to Gua-Rapo. On the way, we passed a girl in the Wendy's drive-thru: 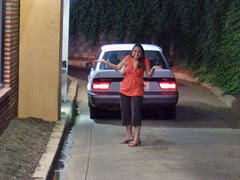 It was fun. There are a few more pictures.
Tags: gua-rapo, dr. dremo's

They were overflying RFK. It was military appreciation day at the DC United Game.

Cool, thanks for the info.