My Shin... The Long Socks Do Nothing!

As I have previously established, I will bleed for my kickball team. 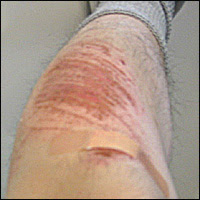 I've slid on dry turf a few times since then, but my long, black football socks have kept me from getting shredded.

Not this time, though.

I've gotten a little better treating the photos, and the June, 2006 version is much... fresher. (As in, it's still oozing.) So, out of consideration for my readers (all 3 of you), here's a blurred version -- if you click it, it will take you to the real version on Flickr: 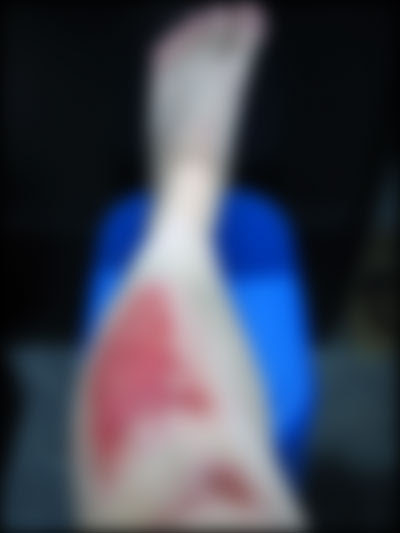 This happened yesterday -- it was our second playoff game, this time against the Ball Blazers.

I guess it would be a good time to say that I did a very, very, very stupid thing in my first at bat.

Bottom of the first inning, I was up fifth. The bases were loaded, with one out. Gonz was pitching, and as I usually do, I took the first pitch to see what it was going to do.

It went right down the middle, a clear strike, so I let it bounce off my foot to foul it off.

Except I neglected to angle my foot. The ball didn't go foul. It just rolled about a yard in front of me.

Catcher Paul scooped up the ball, tagged home, then threw me out. It would have been a double play, of the worst kind... except head ref Jeremy had called foul.

Confusion reigned. There was a lot of shouting. I kept my mouth shut and tried to hide my shame.

Eventually, because it had been called a foul, it was played as a foul, so I got a chance to not humiliate myself.

Needles to say, the Blazers were not happy.

I got on base (they missed the play at home, so we scored), we scored another one, then Gonz walked another batter with the bases still loaded, so we ended up with 3 runs.

Anyway, the Blazers eventually chipped away at our lead, then tied it up. Eventually, I found myself on second base; the ball went into right field, I made it to third, and I got waved home.

I knew I was in trouble when I was more than halfway to home and saw catcher Paul with the ball, up a little towards first.

The look in his eye was feral.

I slid as he threw the ball. It hit me in the leg before I touched the plate. Out, in a cloud of dust.

Of course, the slide pushed my sock up (my left leg was folded under me), so the raspberry.

And of course, this is supposed to be a lake weekend -- no swimming or hot tubbing for this camper until this stupid thing dries up.

You should've picked up the ball and chucked it at him.

Seriously great game.
There were some damn nutty calls... at least they went both ways. (I got on base with a knee kick so high I might as well have hit it with my nose.)
It was a blast! Can't wait until we play you guys again.

-john from the blazers