This weekend was all about the kickball.

Actually, it started on Friday, at the end-of-season party, at PJ Skidoo's in Fairfax.

It was somewhat sparsely attended. Kickball Busters and the Blazers were pretty well-represented. I was the lone YTBer, so I accepted our "Most Supportive of Others" and "Most Spirited" awards (pretty much the Miss Congeniality awards) on behalf of the team.

John and wife Jen from the Blazers were there; Jen took the opportunity to be my wingwoman (as she noted, "We need to get you laid" -- truer words were never spoken). She put up a valiant effort, but you have to work with what you're given, so it was all for naught.

(On a side note, since it'd been a while since I'd seen her when she wasn't massively preggers, it took me a bit to connect "Jen" with "Jif" -- until that point, I was wondering why this odd woman I'd just met was on a mission to get me hooked up.)

On the way home, I saw the Fairfax County Police DUI checkpoint we'd all been warned about, but I was already on a different path and didn't need to deal with that.

Saturday was the kickball regional tournament in Annapolis (well, near Annapolis) -- the first game started at 10am. I was dragging ass, so I got there a little after noon. But it was fine, since I was just going to spectate and take photos.

The weather forecast had been for thunderstorms all weekend, though it was just overcast and cloudy.

Anyway, I posted my Flickr set -- since I wasn't following any particular team, I was able to go look for interesting pics. Got a few nice shots of pitchers, and also ended up with a lot of photos of The Others and Gonzo: 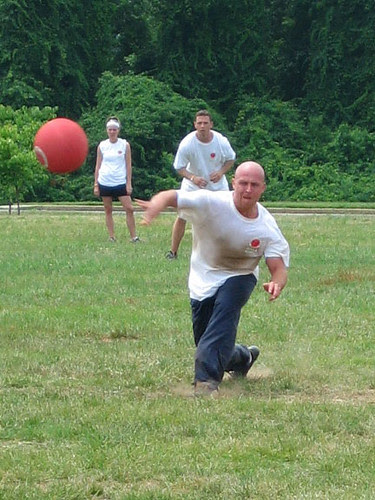 The composition on a couple of the shots is not horrible, although the technical aspects are lacking, especially trying to freeze the action.

Also, I think I had a smudge on the lens.

The sun started to come out; fortunately, there was sunscreen, and since we'd been watching out for rain, I had my big umbrella to use as a parasol.

Anyway, I ended up staying for the duration, which was a lot longer than I'd planned -- we headed to the afterparty bar, which was kind of out of the way, as well as in a VFWish beer hall kind of place. I hung out for a few hours, then with my usual impeccable timing, left as the rain just started reaching torrential status.

I eventually found my way back to Route 50. Stopped by Arlington on the the way back and met up with some folks, but that's a story for another entry.