June Update: I Got Burgled, Got Jacked Up, Got a Job

I Got Burgled
I woke up extra early on a Saturday morning to drive out to an event, and was so bleary-eyed that it took me a few extra seconds to notice that my driver's side car door was already ajar.

At first I thought, geez, I wasn't that bad last night, was I? Then I saw that the driver's interior light was on, illuminating a mess of junk on the seat and a hole in my dashboard where my ashtray/change holder used to be: 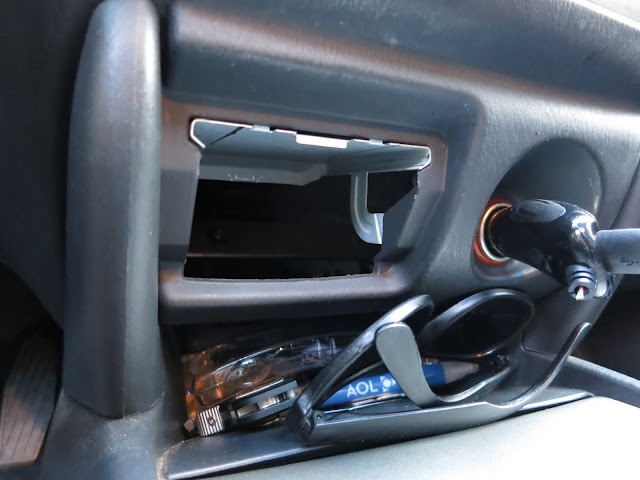 Apparently, I'd left my car unlocked Friday night, and sometime between midnight and 6am, some miscreant took advantage of that fact. I lost a pocketknife and about ten bucks in quarters and small bills. Oh, and the bastard took the damn ashtray, which will run me at least $30 to replace. (I'm sure he -- I'm assuming it's a he -- didn't keep the ashtray to feed the thriving underground market trafficking in 2002 Mazda Protege ashtrays, but I didn't see it laying around nearby. Maybe he kept it as a trophy. You know who else keeps trophies of their crimes? Serial killers.)

Fortunately, the thief didn't get any of the other items in my car that are of nontrivial value, and didn't break anything (unlike that time in Baltimore), so I guess it's just a reminder to be more careful.

I did file a police report online, though it didn't make the police blotter.

Got Jacked Up
Another Saturday, this time at the gym. Like I posted to Twitter, I hurt my back (again) doing exercises (this time, kettlebell swings) that I was specifically doing to keep from hurting my back again. Textbook irony.

The instant *twinge* let me know that it happened. It didn't feel as bad as I've done it before, so I didn't even have to hobble out of the gym. I stayed most of the weekend in, took a few Advil, and thought I was okay.

Then I woke up Monday morning, and my back was so tight I could barely get up. I had to take a work from home day, and spent all day flat on my back, popping NSAIDs, with my laptop perched on my stomach.

By Tuesday, I was back on my feet, though I'm glad my Thursday kickball game got rained out (controversially). I would have been pretty useless.

Got a Job
Did you notice that bit about taking a "work from home day"? As a freelance consultant for the past few years, that was pretty much every day. But I started a new job on June 8 -- I'm a Senior Digital Strategist (read: Associate) at Booz Allen.

Talk about burying the lede. I've held off on announcing it, and in fact, I haven't yet updated my LinkedIn profile. Partly it was to make sure they didn't change their minds... NO TAKEBACKS! Kidding, as we know, of course, Virginia is an at-will employment statement. Though right now, I'm still feeling my way around and learning the ropes.

It's funny: when I was at Deltek, I had to learn a lot about government contracting, but since I'd never done it, it was all theoretical, abstract knowledge. Now, I am one (well, I'm not on a contract yet), so I'm seeing how things actually work.

Including managing and writing proposals. Wow.

This also means that I'm wearing an RFID-equipped leash again, sporting the worst ID picture I've ever taken, and I'm even wearing it on a lanyard around my neck (which I refused to do when I was at AOL, preferring the pull-starter at waist level).

I'm also commuting to Tysons, just like I did when I first moved down here to work for AOL.

One other mildly amusing thing I've found so far: Most of the internal company sites are subdomains that live off of bah.com. When they have to pronounce these URLs, employees actually do say "BAH." As in "Bah, humbug."

I haven't yet taken the Metro to work, but I'll have to give that a try soon.