Feeling the Hand of Fate this Final Four

Shockingly, I'm currently in first place in my office NCAA pool. All of our brackets got savaged pretty badly (special thanks to Kansas and Kentucky), so no one has more than two of the Final Four, and I'm the only person (out of 40+ in our pool) who picked Duke to win it all.

Basically, my fate in the pool hangs on Duke: If Duke wins, I win. Which is the way it should be. (I'm not 100%, but I think if Duke beats West Virginia, I win.)

Speaking of fate, I kept hearing that this year's Final Four was going to be played in Lucas Oil Stadium, but I didn't realize it was in Indianapolis until a few days ago. I have a connection to the Final Four and Indianapolis...

My sophomore year at Duke, the Final Four was also in Indianapolis, and a bunch of us drove there from Durham. (As I recall, we had to make it through a snowstorm. Don't remember much more about the trip.)

Looking to kill some time (possibly between the win over UNLV and the Final), we had dinner at a Pizza Hut, which had been decorated with a big vinyl banner that kind of looked like this: 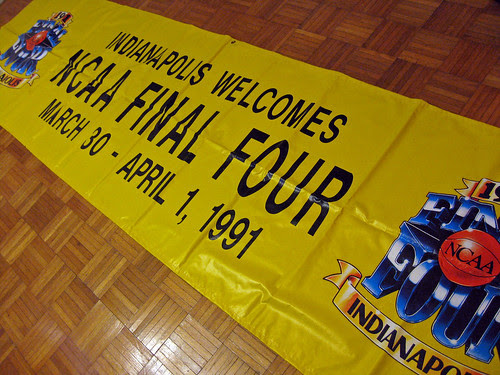 Okay, make that, looked exactly like that. (I think the statute of limitations is up.) Anyway, suffice it to say, after the first one, armed with the yellow pages, our group went around to all the Pizza Huts in the Indianapolis metro area until everyone had their own banner.

It wasn't exactly a subtle piece of work.

Anyway, I can't say that I've gotten a lot of use out of it, (although the 1992 Final Four was in Minneapolis, so I was able to reuse the banner, with some obvious edits), but I could never bring myself to toss it. 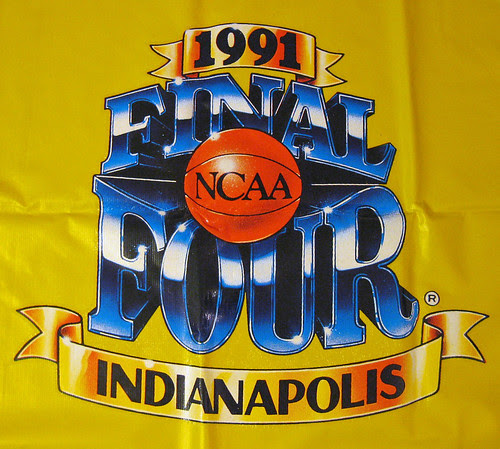