At the Fringe Fest: This Digital Life

On Saturday, I went my to my first Capitol Fringe Festival event -- the play "This Digital Life: Basic Instructions for Coping with the 21st Century"(presented by Truffle Pigs).

In keeping with the subject matter, I found out about the show from an entry in Metroblogging DC, then checked out a review in the City Paper's Fringe coverage... which had a linkback to another review in Justin Thorp's blog (where I also left a comment).

So I bought my ticket (online) and Metroed in. I almost got on the wrong train at Metro Center (I was on autopilot and was headed towards Dupont Circle instead of Gallery Place), but I still got to the Goethe Center with enough time to go next door and grab a beer at RFD.

Actually, make that barely enough time; they almost closed the house on me -- I got a seat in the front row, all the way on the right side (and next to playwright Joseph Price's parents, as it happened).

The pre-show included some projected YouTube videos and such -- there was also a bit of onscreen interactivity, as they solicited for other videos and sites to show: 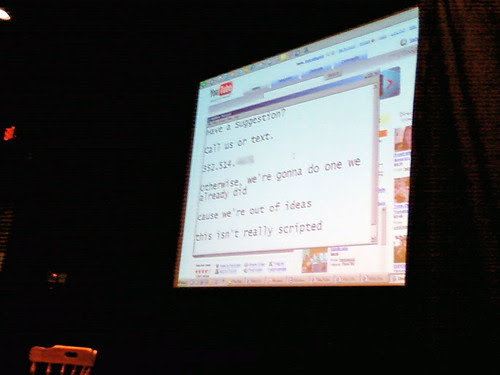 The second act was about the quest for YouTube celebrity (paraphrase: "A bunch of people telling you to shut the fuck up is not an audience!"). It was pretty engaging, though the temporal structure was a bit jarring (as I recall, it started in the immediate past, moved forward to the present, then jumped back between the first two points and then moved farther back).

Since one of the plot mechanisms was an e-mail to the future, this was no doubt the intent, though it did make it hard for us to know when the act was over.

The third act covered vanity domains and naming for newborns, as well as relationship and parenting angst. (Notable quote: "What's the point of all this relentless self-promotion if you don't do anything extraordinary?")

After the performances, there was a talkback session for the audience to provide feedback, and for the performers to explain themselves a bit: 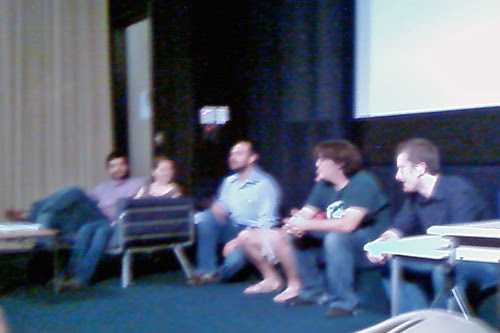 This included instructions on how to procure Second Life hookers (I don't know how Mr. Price's parents took that).

So it was a good event, though I guess it helped that I understood all of the Web 2.0 and tech references.

Anyway, afterwards, Metroed back to Arlington -- got off at Rosslyn and hoofed it uphill, where I ran into Jenny & Mike outside Four Courts, then went to Galaxy Hut for a bit. As I was getting ready to leave, I bumped into Jenny & Adam (different Jenny), so we ended up staying until last call.

There was also some making fun of popped collars (in general), and GW fratboys with monograms on their polo shirt collars that are only visible when the collar is up (I had not known such a thing existed, and was enlightened by a fellow at the next table who had an axe to grind).

Thanks for coming to the play. I'm very glad that the blogosphere mentions first interested you in seeing the production.

I think the show works best for those of us who are so deeply embedded in 2.0 phenomena.

I should also mention I am no expert in the procurement of Second Life hookers. A verifiable newbie, really, and at the current time, I'm not really interested in getting more experienced.