It was in the 70s (that would be degrees F) yesterday, or so they tell me.

I made a spur of the moment decision to ride my bike. This first involved pumping up both tires, which are still pretty much brand-new, but were also pretty flat, since it's been a while since I rode it.

By the time I made it outside to take my token constitutional, it was about an hour from sunset and it had started to get chilly.

Anyway, I rode to Paul's house, which is just about 2.5 miles away.

I was pretty gassed by the time I got there.

I said hi to Paul -- he showed me the latest home improvement project he was working on, and then I had to head back, since I had no lights.

On the way back, I saw this big yellow wheeled thing.

At first I thought I was seeing things out of exhaustion. Then I saw it was a Hummer only much, much stupider.

It was an International CXT, the pickup/SUV that's about as big as you can get without a commercial license: 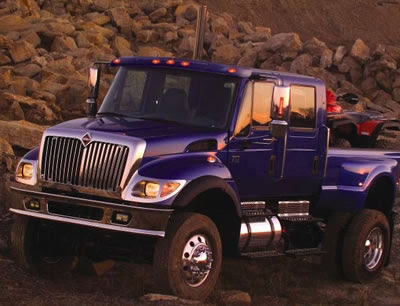 It had a big CXT sticker in the back window, just in case the driver forgot what kind of behemoth it was he was driving.

I didn't have a camera on me, so I had to use a publicity photo, in case you were under the impression that I was mountain biking in the mountains.