Put That Coffee Down! Coffee Is for Closers...

An independent observer agrees...when a beautiful twenty-something girl from [redacted European Community nation] is practically throwing herself at you at a [redacted December/January holiday] party, one should avail themselves of the opportunity and close the deal, because it might not happen again. Ever.

Even if one has been told repeatedly "she has a boyfriend." (Apparently not an issue at that particular moment in time.)

Even if she's a friend's sister and it could get a little awkward later on. (A. You know, it is possible to overthink these things. B. We're all adults here. C. Anything is preferable to mercilessly beating oneself up afterwards.)

Other relevant sayings:
* It's better to ask forgiveness, than permission.
* Man up, nancy.
* A-B-C. A-Always. B-Be. C-Closing. Always be closing, always be closing. 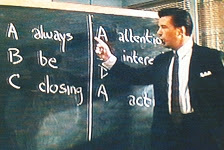 What the 'F' happened to my comments? I needed to remember exactly what I said, and what you said in response, and it is gone... What kind of a blog do you think you're running?

Sorry, that was part of the Haloscam (ooh, burn!) bait-and-switch fiasco, which I also posted about.

Fuck sir? You mean coitus? Everybody knows 'F' is for Fiasco... just like 'C' is for Cobbling.