Eyewitness Account of a Power Outage at the Gym

535 pm, EDT: The lights inside the gym flicker, then die. The silence ends the white noise from the air conditioning and piped-in XM Radio broadcast, propagating the sounds of grunting at the weight stacks and heavy breathing throughout. 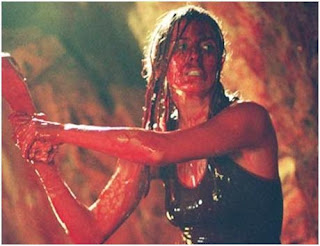 A few policy-minded folks are concerned at first, but see that emergency lights and iPods continue to function, ruling out a decapitating EMP attack. They relax and focus on completing their workouts.

The summer sun still shines and the government-mandated emergency lights illuminate the dark corners of the locker rooms, so most exercisers focus on maintaining their age-appropriate target heart rates.

541 pm, EDT: A few nervous laughs are heard, competing with the non-electrically-amplified exhortations from the cardio kickboxing instructor in the main activity room (initially confused with screams of pain and distress from the child care room, with their now-silenced DVD players)

Although the ceiling fans and HVAC systems have ceased to function, the temperature and humidity have not risen noticeably. Morale remains high.

549 pm, EDT: Cardio exercisers continue with their routines, even though their heartrates are now untracked. Some machines, like the treadmills, are stilled by the lack of power, but others, like the bikes, ellipticals, and rowing machines, are mostly unaffected. Some even generate their own power. However, the exertion causes the temperature to creep up steadily. Even then, hot yoga aficionados rejoice.

555pm, EDT: Crossfit and P90 adherents, initially cocky and upbeat, swoon suddenly due to their lack of bodyfat reserves. They are immediately set upon and consumed by calorie- and protein-hungry powerlifters, with BodyPump and Yoga students stealthily swooping in to scavenge the remains.

Those who are unable to impose their will on others, such as Zumba and Body Sculpt aficionados, ally themselves with casual and sport-specific weightlifters. All survivors have long since raided the free weights and machine accessories for parts that they can fashion into hand weapons.

6:20pm, EDT: The survivors find themselves living under an uneasy truce. The few surviving non-athletes are employed either as body servants or court jesters.

6:34pm, EDT: This reporter is able to make his escape and report his findings, after completing his flashlight-assisted shower ritual. May God have mercy on his soul.