Don't Vote for the Homosexual (Anti-Gay Smear or Sneaky Tactic?)

Got this postcard in the mail today: 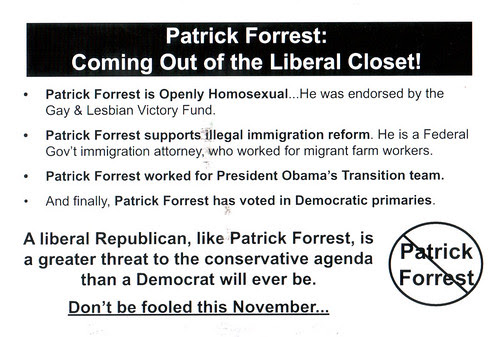 The front of the no-frills, black and white card says:

Patrick Forrest: Coming Out of the Liberal Closet!

* Patrick Forrest is Openly Homosexual... He was endorsed by the Gay & Lesbian Victory Fund.

* And finally, Patrick Forrest has voted in Democratic Primaries.

A liberal Republican, like Patrick Forrest, is a greater threat to the conservative agenda than a Democrat will ever be.


Don't be fooled this November...

The back of the postcard: 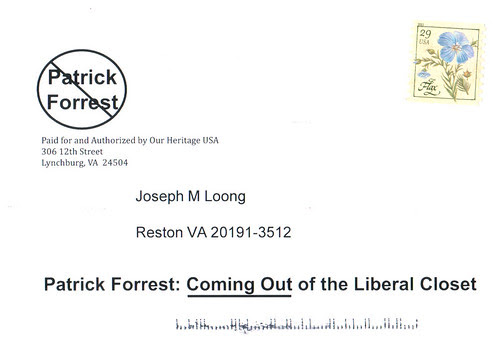 The return address says, "Paid for and Authorized by Our Heritage USA, 306 12th Street, Lynchburg, VA 24504, and repeats the "Coming Out of the Liberal Closet," with heavy emphasis on the "coming out" bit.

Our Heritage USA doesn't have a web site I can find, and the Google Maps result for 306 12th Street Lynchburg isn't particularly enlightening.

As to the context of the postcard -- Patrick Forrest, a resident of Reston, VA, is the Republican candidate running against Democratic incumbent Janet Howell for the Virginia State Senate in the 32nd District, which covers portions of Fairfax and Arlington counties.

His campaign Web site doesn't mention his sexuality, though he is listed on the Gay & Lesbian Victory Fund site and he's apparently been pretty open about it in news coverage which I hadn't been paying attention to.

As to the second bullet, about supporting illegal immigration reform and being a Federal Gubbmint immigration attorney, I'm not sure why this is supposed to be a bad thing, other than it includes some hot-button keywords.

According to the campaign Web site, he worked for the Department of Homeland Security as lead counsel for the E-Verify program (you know, the program designed to filter out illegal immigrants from employment), so it's kind of a weird attempt to smear based on buzzwords.

The other points seem to be half-truths -- he was on the Homeland Security Presidential Transition Team in 2008 (while working for DHS, hardly a partisan matter). As to the voting in Democratic primaries, Virginia is an open primary state and you don't have to register with a party, so it's another pretty silly smear attempt.

I haven't been paying attention to the local races -- I just assumed that incumbent Howell was pretty safe given the general blueness of the area -- and I wasn't even aware of candidate Forrest until today's postcard.

In my exhaustive Friday night research, I see the Washington Blade had an article yesterday about negative campaigning by the Victory Fund on behalf of Forrest, though previous coverage looked at attacks on Forrest by the other side.

Knowing nothing about "Our Heritage USA," and seeing the Lynchburg VA address, the initial  assumption would be that it's a clumsy attempt by a conservative group to smear a gay candidate.

But then again... this is a general election, not a primary. Given the closeness of the margin of control of the Virginia State Senate, would Republicans throw one of their own under the bus by essentially saying "let the Democrat win" this race?

Putting on my conspiracy hat, I wonder if this might be a reverse-psychology attempt by a Forrest partisan to siphon moderate Democrats away from incumbent Howell. The controversy around the anti-gay message would generate outrage and gather attention to the race, and would at least help with name recognition for the challenger.  Though it's awfully close to Election Day -- you'd think a tactic like this (if it were indeed a tactic) would have been better a few weeks ago.

This is why transparency and reporting is important when it comes to political financing, kids.

I found this article while likewise trying to find out who "Our Heritage USA" is (and to ask them to kindly never address another filthy, bigoted piece of mail to my home again). The screed doesn't even make sense: Whatever Forrest is, policywise, I'm sure that Janet Howell is at least as much. (She's a fervent supporter of gay and lesbian interests: when my home shifted into her district, I sent her an e-mail asking for her position on every issue including DADT and DOMA, and her responses were unwaveringly and emphatically favorable.)

I think your reverse psychology thesis is right on. This mailing is being sent to Democrats. It's targeted and not a blanket mailing. Someone is trying to smear Howell with this.

Our household also rec'd this crap/smear piece, which is a desperate attempt by janet howell's campaign, trying to 'Swift Boat' Forrest... typical loser/desperate move by the demonrat party and the howell campaign.

Washington Post's VA Politics blog has an article up about it.

Anonymous #2: I'm not registered with any party, so I don't know how targeted it a mailing might be.

Anonymous #3: Provenance of the mailing is unknown, so nothing's been determined yet. Also, anyone who uses a term like "demonrat" or "repugnican" automatically stamps themselves as a partisan idiot. Thanks for identifying yourself as such.

I was curious about this mailing, too. I wonder if it's legal to mail a piece that is clearly fraudulent--as the organization that purportedly sent it, Our Heritage USA, doesn't exist. I hope the perpetrators are exposed.