Pints of Guinness and Fountains of Wayne

Sunday was interesting. As threatened, went to O'Sullivan's for brunch, where I started with Guinness and Eggs Benedict, and ended with a Black and Blue: 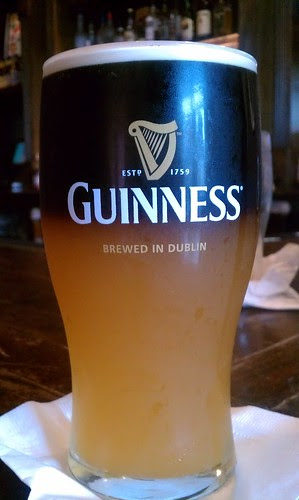 Guinness layered over Blue Moon.
There may have also been a Baby Guinness in the mix, which would explain why I missed the opening act of the Fountains of Wayne show at the Birchmere.

One good thing about going solo to shows at Birchmere, though, is that you can get there an hour after the doors and still get a seat right up front: 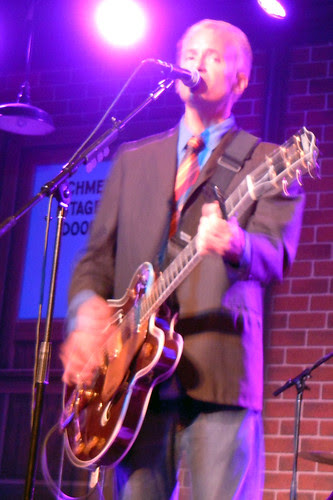 Fountains of Wayne frontman Chris Collingwood.
Of course, that doesn't help when your new (refurbished) camera dies after two shots because you forgot to check the battery.

I ended up using the new smartphone; this is the least unusable shot, when the band pulled up a few ladies from the audience to shake their maracas during a song: 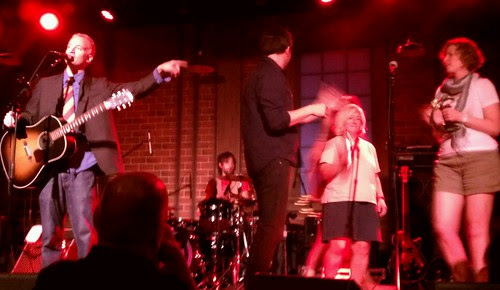 Was it Mexican Wine? I forget.
Brightest Young Things has a writeup, which mentions the cover medley in the middle of Radiation Vibe, featuring Peter Frampton's Do You Feel Like I Do; Mad World; and Blue Oyster Cult's Burning for You... though it notably missed the starter, Wings' Jet.

Another notable moment was when bassist Adam Schlesinger called out a guy recording video with a Flip mounted on a table, noting that he'd be getting great shots of the back of head of the guy in front of him.

Later, after noting the fellow had apparently gotten kicked out for violating Birchmere's "no video" rule, Schlesinger apologized, saying that in this age of YouTube, he wasn't trying to get the guy ejected, and invited him to come as their guest for Monday's acoustic show.

Speaking of acoustic, the band played an acoustic-ish take on Stacey's Mom to start out their encore.

It was a good show -- I picked up their new album to give a deeper listen (I hadn't realized they'd switched labels to Yep Roc), as well as a few t-shirts.

On the way home, I stopped by Galaxy Hut to catch a bit of the karaoke. It was not that crowded towards midnight, though I wasn't tempted to try singing any FOW songs (they're out of my very limited range, anyways.)

I'm not usually a Sunday drinker; between brunch, the show, and the post-show, it was not a very restful and recuperative way to end the weekend.