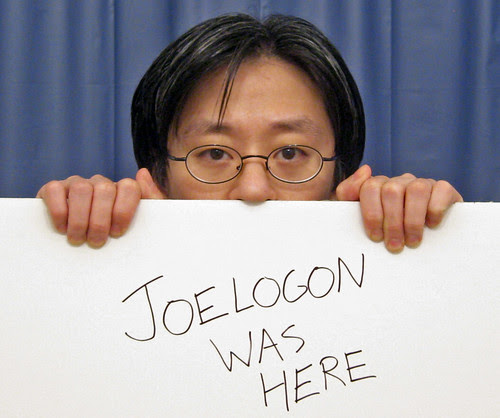 I think this is what you are looking for http://www.youtube.com/watch?v=omLpwpRH6PA Remember me.

It's a little out a scope, not to mention high-maintenance. But sure, along those lines.

So I got to wondering, "What's the point to a memorial to Joelogon, if it's buried in the desert, frozen in the ice sheet, or submerged in the Ocean's deepest cranny?"

Not a lot, I guess, unless you count personal satisfaction. If you want to be remembered, the memorial should be somewhere mortals can walk by and say, "I wonder who this Joelogon guy was," and then Ubergoogle you on their Omnitron or Transfinite or whatever digital data gizzie is in fashion.

Riffing on the crack-head and the pawnshop idea, it should be made of something without a lot of intrinsic value -- so platinum is definitely out. I'm thinking German silver (60% copper, the rest nickel and zinc), but copper kind of dear lately, so I'm thinking of the material affectionately known as 'pot metal' (zinc and whatever other low-melting-point junk you have on hand this week).

If you do intend to bury, freeze or submerge your keepsake, I'm thinking heavy cast glass, maybe with a lot of lead. Cast it with your name cut through it. Not much eats glass; it's basically sand, so the hock-value would be nil.

A status made out of AOL CD's....
Those things last forever, and funky in the sunlight, like the conference tables.

Perfesser -- was looking for something that would allow me to be remembered even if there was no one left to do the remembering -- say, a mere 10,000 years from now. With regard to park benches and what not -- who knows what real estate developers and such will do in 10 years, let along 10,000?

PJaol: From what I can tell, the longevity of plastics may vary; they may last, but not necessarily in one piece.

plootonium. which can be synthesized using a microwave oven and twinkies. google it.

Is that some sort of videogame reference I don't understand?