Driving home last Saturday, I saw the following things on I-95:

* A "9/11 was an inside job" Truther banner hanging from an overpass near Baltimore. It made me annoyed.

* Further along in Maryland, a flight of about 6 twin-engine military cargo planes (probably C-130s) flying low and heading south, I guess for a flyover or something.

* The world's worst turn signal user (with Maryland tags, go figure). His turn signals were on continuously the entire time... he'd be in the left lane with his left blinker going and cut to the right. I don't think he realized that turn signals don't automatically cancel if you make a minor lane change. Throw in the random brake-checks and trying to deal with a NJ State Trooper that was basically pacing us and it was particularly fascinating -- I followed him (from a safe distance) for a good chunk of the southern New Jersey Turnpike.

All of these (except the Truther banner) made me wish I'd had my camera with me, instead of in the back.

Anyway, that was about it on the way down. While I was up in New Jersey, we went to get chain Tex-Mex for my Dad's birthday, and coming back, out in the distance, we saw the 9/11 tribute "Towers of Light" illuminating the clouds.

We had dim sum on Sunday.

The way home was fairly uneventful, though I almost got lost dodging a backup at the Delaware tolls -- fortunately, I had the GPS, and was familiar enough with the area to figure out where I was going.

I did hit a backup on the Beltway (some sort of accident on 270), but that did give me a chance to take a quick snap of the Mormon Temple during sunset: 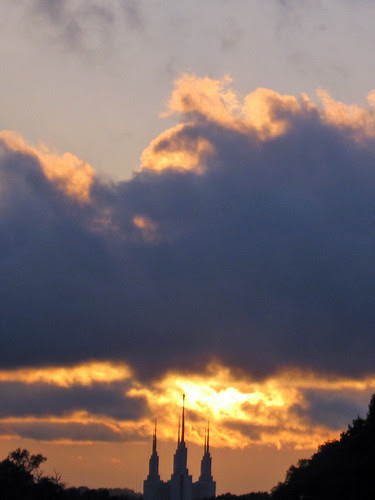 We saw those cargo planes too. We were around the Susquehanna river bridge (sure that bridge has another name than that) when we saw them.

I thought that was you. (No, not really)