2010 So Far in Greenlit Fark Headlines

I haven't been blogging much lately, due to a combination of writers' block, self-doubt, and microblogging. What I have been doing is channeling my creativity (such as it is) into Fark headlines, which are mostly anonymous.

(This can be a good thing, especially when you rely on tropes like corny jokes, bad puns, casual misogyny and stereotypes -- applied ironically, of course. Headline submitters are anonymous, unless they out themselves in the comments, or opt to have their submissions listed on their profiles. I have my greenlit headlines listed, but not my redlights.)

Right now, I'm at 592 greenlit headlines, which puts me at about #89 on the current all-time Fark top submitters list, or firmly on the small end of the short head of the long tail of Fark submitters.

I'll try to talk more about using Fark as an example of headline writing and creating a culture of uncompensated contribution, but for right now, here are some of my more favorite headlines from 2010 to date, in roughly reverse chronological order -- each link below goes to the Fark comment thread, which contains a link to the relevant article. (You can also see all of my greenlights on my Fark profile, including the many lackluster ones that just happened to be submitted at the right time.)

See cells in the Seychelles for the sea scores [This one takes the classic tongue-twister and reworks it for the article. It kind of makes sense in context.]

Video of female service member servicing five service members' members circulating Fort Bliss [There's a better example of this kind of repetition wordplay later. Also, though the wording suggests it, since the article link was to the NYT, you don't actually see the video.]

It's 130 miles to Cowtown, we got a 160-pound barrel, a half-baked agenda on bullying, it's July and we're wearing full rodeo clown makeup. Hit it [An obvious Blues Brothers reference, but it has enough oddness to make you want to click.]

Pentagon surveys the troops: "How icky would it be showering with a gay? a) Squicky. b) Very icky. c) Icky. d) Mostly not icky" [I liked the Squicky/Icky construction.]

Muslims are disappointed by Obama. See, they really are just like everyone else [Article rode the wave of a series of liberal breast-beating articles from various places on Obama disillusionment.]

New Senate bill would require terrorists to present fake ID before buying prepaid cellphones [Somewhat subtle, at least compared to the rest of these.]

Al Qaeda has acquired a potentially devastating technology: Autotune [Set up as a serious headline, ending with the punchline.]

Person #1: Isn't it amazing how I can use my cell phone to get coverage about things that just happened in this murder trial? Person #2: You mean the one we're serving as jurors on? [I admit it has kind of a Readers Digest "Life in These United States" feel to it, but it was still funny.]

NJ man arrested for having a minor, amount of cocaine in his car [Some grammar humor of the "Eats, Shoots and Leaves" variety, which in terms of Fark greenlight potential, is only slightly behind Periodic Table puns.]

Design student reinvents the Cone of Silence, which looks amazingly awesome. Would you believe marginally effective? How about irredeemably stupid? [A very direct pull from Get Smart, which fit the subject matter.]

Under certain conditions, it's acceptable for passive voice to be used [More grammar humor. Distressing to see the number of self-professed Grammar Nazis in the thread who failed miserably trying to use the passive voice.]

Roundup-resistant weeds may require more frequent plowing, according to your mom [Every kind of headline is enhanced by a "Your mom" joke.]

Man getting testicular cyst removed accidentally gets the volume discount [Going for a subtle cringe-inducement factor.]

An iPhone. An air conditioner. Dirty underpants. A sock-wearing mannequin. Thousands of cigarette butts. A pregnancy test. Denture cement. Fake breasts. An 8-track tape. A jockstrap [The rhythm of the words is hypnotic, not to mention intriguing.]

Thank you for calling the Federal Nuclear Detonation Response Hotline. Your call is very important to us. Current wait time for the next operator: 24-72 hours. ♫ Tall and tan and dark and lovely, the girl from Ipanema goes walking ♫ [Kind of a meta thing, as action movies have co-opted the Girl Form Ipanema for moments of incongruous calm.]

Photo surfaces of President Obama refusing to shake the hand of a disabled janitor [A trolltastic headline that only works when you click through to the photo: 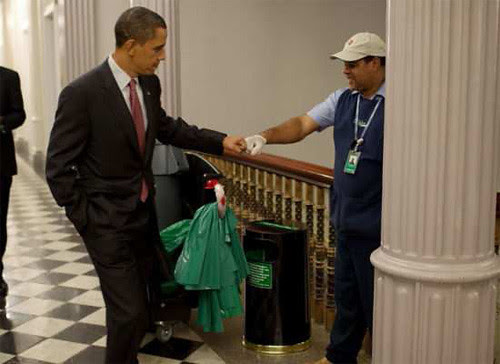 Eiffel Tower attacked, suffering significant structural damage. Story developing [Another trollerific headline -- discerning readers noted the lack of a "NEWSFLASH" tag which this kind of breaking news, if true, would suggest, as well as the news source. The joke is in the photo: 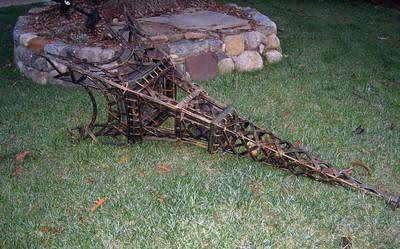 Old Bridge old bridge repair repairs fragment fragments, state State Police police speaker, speaking [Probably my best this year -- it sounds like nonsense, but when you parse it out, it makes sense (except for one or two really redundant bits). As I posted in the thread: "Old Bridge [town] old bridge repair [overall project] repairs [the specific action -- this was the most redundant bit] fragment [breaks] fragments [off the bridge], state[s] State Police police speaker, speaking [also redundant, but necessary for the gag]."]

Good neighbor: Operates noisy equipment indoors, with the windows closed. Dead neighbor: It's a portable generator [Variant of the comparison headline, a la Goofus and Gallant.]

Whoever said, "There's no harm in asking," clearly never submitted a request under the Indian government's Right to Information Act

Armed robbers in $1 million perfume warehouse heist who shouted "NYPD, hands up" may be criminals, but at least they're not liars

"You have the right to, like, not say anything. You have the right to an attorney, unfrozen caveman lawyer or other law-talking guy. If I said you had a beautiful body, would you hold it against me in a court of law?" [Rather long headline on the ruling allowing cops to paraphrase the Miranda warning, take to absurdity.]

American military gets its thumb drives back. U-S-B, U-S-B, U-S-B [Another favorite, subverting acronyms and jingoism.]

Open workplace romances are increasingly common. You still eat lunch alone at your desk [I actually said "Ouch" to myself as I wrote this.]

Lackawanna Cut-Off cut off for Lackawanna [Another repetition wordplay.]

Company has plan to solve energy crisis using orbiting laser satellites. Not sure why they need an underground volcano headquarters, though

Henceforth, NPR will be known as NPR